For years, ‘experts’ have told cat owners that domestic cats are solitary creatures who dislike the company of other cats. No doubt cat owners have viewed the communal sleep heap on the armchair with puzzlement, wondering whether it is the cats or the experts who have their facts wrong. While the ancestors of our domestic cats may have been solitary hunters in the forests of Europe and Africa, domestic cats frequently live in harmonious groups; playing, sleeping and even hunting together. Many form close attachments to other cats and even to other domestic animals.

It has been suggested that keeping several cats in one household forced them to become more sociable due to the unnatural conditions. Certainly, some cats are solitary by nature (just as some humans prefer their own company) and show signs of stress when there are too many cats in a too-small area.

Other cats simply tolerate their fellow lodgers and work individual territories within the household. A good domestic cats actually thrive on feline companionship though they do like to be able to retreat to a private area at times (just as humans need moments of solitude). Studies on feral colonies have shown that domestic cats, like lions, are rather sociable creatures and even battle-scarred tomcats will return from walking alone to relax with the family.

Cats in captive colonies at animal shelters, often form close friendships which last for many years. Eagle shared an enclosure with 11 other ‘unhomeable’ cats. The other cats frequently rubbed against Eagle and chose to sit close to him. When Eagle died, the relationship between the other cats broke down and the colony fragmented into several small groups.

The super-sociable Eagle had been the glue that held them together. Cats rub against their companions to mingle their scents and reinforce the bond. Biologists studying farmyard colonies noticed that lower ranking cats often rubbed against higher ranking cats. Rubbing also has a hierarchical function and a cat’s social standing can be measured by the number of times other cats rub against it. When our cats wind round our ankles it is more than an affectionate greeting; they are letting us know that we rank higher than them. Maybe it’s time to worry when Puss DOESN’t rub round our ankles.

Rubbing, nose-bumping greetings and sitting close to other members of the cat’s ‘family’ are not actions caused by keeping cats in ‘unnatural proximity’ to other cats. All of these activities have been observed among cats living in feral colonies. Behaviorists studying both urban and rural colonies found that the cats formed ‘family groups’ rather than remaining solitary.

It is easy to dismiss this as several cats exploiting a single food source, but the amount of mutual grooming and even communal kitten-rearing suggest that these colonies are more like prides of lions. Communal hunting is only rarely observed since, unlike lions, cats hunt prey smaller than themselves.

Cats have evolved during their long association with humans. Only those cats which tolerated human company went on to rear kittens in close proximity to humans. Living close to humans means living close to other cats as well. Over hundred of generations, those cats best suited to living in feline colonies, have reproduced most successfully. Our present day domestic cats are descended from these socialized cats. Feral cats are descended from domestic cats and though they are not socialized with humans, they are still social with other cats.

Even co-operative hunting does sometimes occur with closely bonded cats. Littermates Bubble and Squeak were two such hunting partners. Between them, they quartered the field in front of my home, flushing out field mice for each other and often sharing the catch. 12 year old Scrapper regularly teamed up with unrelated 6 month old Aphrodite to hunt the birds that devastated my fruit bushes.

This was a beneficial partnership as Scrapper, who had no teeth, flushed birds towards Aphrodite who dispatched them, but didn’t eat them! There was no doubt that Scrapper masterminded the operation as Aphrodite was not very bright!

In 1996, studies of cats in the Galapagos Islands indicated that some cats will hunt co-operatively to increase the likelihood of successful hunts. This observation was made when prey was difficult for a single cat to catch. At the cat shelter where I work, ferals Kim, Jade and Gem (littermates) did not hunt as a group but they frequently shared their kills.

Many cats, both feral and domestic, apparently enjoy each other’s company for its own sake and not just because there is safety in numbers. Though unneutered tomcats are often hostile towards each other, there are exceptions where toms which have been reared together may remain companionable when mature – supply of food and females permitting.

Unrelated cats may gang together to defend themselves or their territory against intruders. On one occasion I was woken by Aphrodite (aged 8) and Sappho (aged 15); between them they had cornered an opportunistic cat which had come in through the cat flap. Aphrodite guarded one end of the long hallway, Sappho guarded the other end and they played ‘ping-pong’ with the youngster until I rescued – and evicted – him.

In our households, unrelated cats often form close attachments to each other and a recent survey by British behaviorist Claire Bessant found that a number of cats grieved or pined when a companion cat died, sometimes to the extent that force-feeding was needed or another kitten had to be acquired to provide companionship.

It is only quite recently that experts have started saying what many cat-owners have realized all along – cats are not necessarily solitary creatures. Some require a solitary lifestyle. Others are content to live in small groups, particularly if all of the cats are neutered. Far from suffering when kept in groups, many pet cats thrive in the company of other cats especially if they have grown up among other cats. Its ancestors may have walked by themselves, but the cat has evolved into a far more sociable animal both in a feral and a household setting. 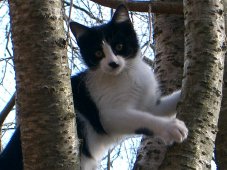