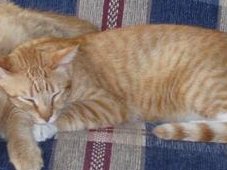 Tourin, a musician in Mount Laguna, Calif., believes that her jet-black kitty is so vocal because she’s dreaming. And Tourin isn’t alone in her belief. Many cat owners think that felines dream very similarly to the way people do – and there’s some convincing scientific evidence to back this up.

To Sleep Purrchance to Dream
Most mammals have the same sleep patterns that humans do, fluctuating between what are called Non-REM and REM sleep modes. During the REM stage – which stands for Rapid Eye Movement – scientists say our brain waves look identical to those produced when we’re awake. It’s during this stage that we dream. But to stop us from acting out our thoughts, the brain shuts off a switch to our major muscles, temporarily paralyzing us. In humans, REM happens about every 90 minutes. In cats, it occurs approximately every 25 minutes. Each episode lasts for several minutes.

"If you wake someone up during this [REM] phase of sleep, they can tell you about their dreams," says Dennis O’Brien, DVM, and Professor of Neurology at the University of Missouri’s College of Veterinary Medicine in Columbia. "Cats show the same pattern. They go into REM ? so the presumption is they’re dreaming."

What Do They Dream About?
Researchers believe they generally know what felines dream about. Studies done on sleeping cats, in which the paralysis of REM was eliminated, resulted in the same behaviors seen in alert, prowling felines including ears pricked and walking – even pouncing – on imaginary prey.

Adrian Morrison, DVM, is one of the scientists who conducted the cat studies more than 40 years ago. Today the professor of behavioral neuroscience at the University of Pennsylvania in Philadelphia only works with laboratory rats, but the sight of a sleeping cat still fascinates him.

Signs of Dreaming
Morrison says carefully observing your dozing pet can offer clues to when he or she enters into the dream state:

Catching a cat napping isn’t difficult. Feline predators are active at dawn and dusk. However, the rest of the day – upwards of 20 hours – is spent curled up in a warm spot, snoozing. "That’s their natural adaptation," explains Dr. O’Brien. "Cats are adapted to frequent, small meals; short hunts; and then they’ll cat-nap in between."

Connection Between Health and Dreams
If your cat has trouble resting, it might be caused by a stressful environment or it could indicate an underlying medical condition. While a variety of diseases can affect a cat’s sleep-wake cycle, Dr. O’Brien says the most common one seen in his clinic is hyperthyroidism, a treatable condition in which elevated thyroid hormones can cause increased activity level, restlessness and cranky behavior. The disease usually strikes senior cats. A blood test taken by your veterinarian can reveal if your kitty has the disorder.

Rest Easy
Healthy felines don’t need much help getting shut-eye. But if they seem to be having a hard time getting their zzz’s, there are ways you can help:

Tourin even goes a step further: she regularly plays the harp for her. The plucking of the strings has a soothing and relaxing effect, with most animals dozing off after listening for just a few minutes. Tag is no exception.

Before Tourin adopted Tag, a team of rescue workers found Tag huddled underneath a bathtub in a house destroyed by the recent southern California fires. And Tourin thinks she knows what Tag might dream about. After her kitten’s harrowing fire experience, the feisty feline has shown an unusual love for water. "I think if Tag had her druthers, she’d like to jump into the bath tub with us," says Tourin. "I suspect that somewhere, maybe when the fires happened, a pipe broke. I can only guess there was a trickling bit of water that was her saving grace." 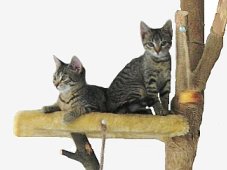 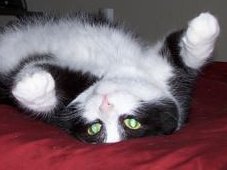 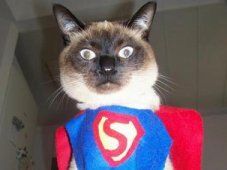