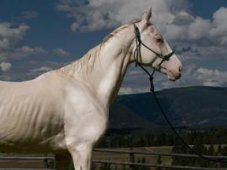 That said, hormones can make a difference in how a horse expresses its basic personality. Understanding those differences can help a handler communicate more effectively with individual horses of different sexes. Take stallions, for example. In many ways, they are the most consistent gender to work with because about every three or six seconds or so, they are wondering where the mares are. So their handlers never have to wonder what it is that is going to interrupt the program next. It is always the same thing.

In the wild, Nature prepares stallions for their job from the time they are baby horses in the herd with their mothers through the time they are pushed out into bachelor herds and eventually gather a herd of their own. Once a stallion has matured and has a band of his own, his responsibility is to constantly check to see if any of the mares are ready to be serviced or if another stallion is hanging around looking to depose him. That is it.

What we have to remember when we are dealing with stallions is that if there are no mares around to service and no one is challenging them, they are simply really nice guys. They may be thinking about sex all the time but if there is no outlet, they just go back to worrying about every horse’s number one drive, which is to eat.

A colt just starting his training may be more or less easy to handle depending on whether he was raised pretty much just with his mother and maybe a couple of other horses in a barn and paddock situation or whether he was raised in a herd. In a herd situation, the broodmares teach the colts their manners and interaction with other colts teaches him about pecking order and all that.

Either way, when you start working with him there are going to be times when he acts a little hot because he is feeling his sex drive. A lot of people misunderstand this as bad behavior rather than as natural behavior. So the first thing they try to do is "discipline" him. This, however, is not horse logical. Instead of feeling a correction like a jerk or slap or sharp word as a communication of the feeling "mind your manners," he feels it as a challenge. In his mind, you are picking a fight with him over the mare he is now sure must be around somewhere. Otherwise, why are you fighting with him? Instead of teaching the horse to pay attention to you, you are actually teaching the horse that you are there for the fight.

The solution is to establish a routine with a stallion that always makes you a calm and quiet place to be, not a constant challenge he needs to address. Heeding allows horse handlers to establish calm routines on the ground with a baby horse that will carry over to his work under saddle or in the breeding shed.

So when we first start handling a baby colt on the ground and turning him loose in the arena to play we use a "jaw stabilizer" – a drop noseband just snug enough so he can’t get his teeth apart to nip. That way we can concentrate on staying calm and rhythmic and we can interrupt unwanted behavior patterns without challenging him.

A young colt can be very mouthy but, if his jaw is stabilized, we do not need to slap him or poke him or startle him in any way if he reaches around and tries to challenge us with little nips. Instead, we can just continue to rhythmically scratch and groom as we slide our fingers up his neck into the jaw groove, allow him to turn his head and feel the discomfort of the finger pressure on his own, and interrupt his behavior pattern. Getting him to accept our grooming calmly and quietly is the beginning of developing a relationship with a colt.

As we begin using heeding groundwork to keep his attention on us, we want the colt to develop the feeling that we are a calm, consistent, trusted place to be. We are not there to challenge or fight with him.

As we start heeding the colt around the arena on a lead line, we establish the consistent routine that we will use whether we are loading him in a trailer, leading him into an arena, or taking him to the breeding shed. We want to walk at the secondary line that passes through the colt’s shoulders. If we move in front or behind that line, we influence the horse to go forward or backward or to speed up or slow down. We do not want to be walking out in front of him. If we are in the right position, we can safely and calmly heed him in the direction we want him to go even if he is tossing his head or rearing a little.

We need to make sure he stays at our side and that we stay at his shoulder. Never walk out ahead of him. If he wants to act up a little we just keep calmly heeding him in the direction we want him to go. It is important to teach position in heeding properly to a stallion. You want him to respect your position at his shoulder to the extent that you can keep him right beside you when you do decide to use him for teasing and breeding. He needs to understand that he is not allowed to move ahead of you or run around you. He must stay beside you.

Eventually you will use other routines to establish a relationship with the stallion so that breeding mares is never a big deal fight in his mind. You will have one place where you tease the mares, one place where you cover the mares, and the rest of the time he is with you has nothing to do with breeding. You do not haul the horse anywhere else to cover mares. If he gets excited and starts dragging you along, you do not argue or yell or yank or start a fight. You just keep on maintaining a feeling of rhythm and relaxation by quietly continuing to heed him along, maybe stopping and backing him up a little then go back to moving forward while staying at his shoulder.

When you are not in a breeding situation, you do not harass him. We had a stallion named Plute here at Meredith Manor whose favorite mare was an almost grey Hollywood Gold daughter. When he was in the ring and someone else came in on a light-colored horse, there would be a little shake in the saddle as he would give an almost imperceptible nicker to see if it was her. He was not a screaming demon and if his rider had stuck a spur in him to reprimand him it would have raised the excitement level rather than telling Plute what to do or not do.

Make handling a horse with calm, consistent rhythm and relaxation your own routine whether you are working with a stallion or a gelding or a mare. Train horses using horse-logical corridors of pressures to establish routines that will be meaningful to a stallion in any situation, including breeding. Train them like any other horse. Then even if they are thinking about sex every few seconds, it will not make any difference. 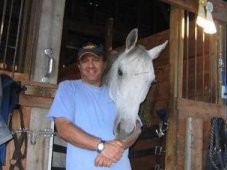 Jun 29, 2017 admin Comments Off on Heeding: Working In Corridors