They are not rodents; taxonomically they’re in between cats and dogs, a little closer to dogs. They are friendly and make excellent pets. If you’ve never met one before, the easiest way to think of them is somewhere between cats and dogs in personality, but rather smaller. They can only see reasonably well, but they have excellent senses of hearing and smell. Some are cuddly, others more independent; they vary a lot, just like other pets.

Ferrets are a lot of fun. They are very playful, with each other and with you, and they don’t lose much of that playfulness as they get older. A ferret – or better, two or more – can be a very entertaining companion. They are smarter than cats and dogs, or at least they act it. They are also very inquisitive and remarkably determined, which is part of their charm but can also be a bit of a bother. They are friendly, and they do know and love you, though for some of them it can take a year or so to fully bond. They can be trained to use a litter box and to do tricks , and most of them love to go places with you, riding on a shoulder or in a bag . They sleep a lot, and they don’t particularly mind staying in small places (a cage, for instance, or a shoulder bag) temporarily, although they need to run around and play for at least a couple of hours a day. 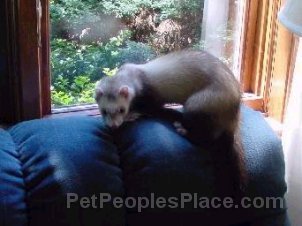 A "single" ferret won’t be terribly lonely, although the fun of watching two or three playing together is easily worth the small extra trouble. Barring accidents, ferrets typically live 6-10 years. Ferrets have lots of good points as pets, but there are some negatives as well. Like kittens and puppies, they require a lot of care and training at first. They’re "higher maintenance" than cats; they’ll take more of your time and attention. Ferrets have their own distinct scent , which bothers some people, and many of them aren’t quite as good about litter pans as cats are. Although most ferrets get along reasonably well with cats and dogs, it’s not guaranteed, so if you have large, aggressive pets (particularly dogs of breeds commonly used for hunting), keep that in mind. Likewise, small children and ferrets are both very excitable, and the combination might be too much . Finally, the importance of ferret-proofing must be emphasized.

Ferrets are less destructive than cats, but they love to get into EVERYTHING, so if you keep them loose you’ll need to make sure they can’t hurt themselves or your possessions . They love to steal small (and not so small!) objects and stash them under chairs and behind furniture. They like to chew on spongy, springy things, which must be kept out of reach or they’ll swallow bits. Accessible boxes, bags, and trash cans will be crawled in, and houseplants within reach are liable to lose all their dirt to joyful digging . Finally, many ferrets tend to scratch and dig at the carpet . Naturally, these traits vary from one ferret to another, but they’re all pretty common. If you’re not willing to take the necessary time to protect your property and your pet, a ferret may not be for you.

Ferrets often change colors with the seasons, lighter in the winter than in the summer, and many of them lighten as they age, too. Different ferret organizations recognize different colors and patterns, but unless you’re planning to enter your ferret in a show, the exact label isn’t particularly important. The albino is white with red eyes and a pink nose. A dark-eyed white can have very light eyes and can possibly be confused with an albino. These can actually range from white to cream colored with the whiter the color the better. A dark-eyed white (often called a black-eyed white) is a ferret with white guard hairs but eyes darker than the red of an albino. The sable has rich dark brown guard hairs with golden highlights, with a white to golden undercoat. A black sable has blue-black guard hairs with no golden or brownish cast, with a white to cream undercoat.

The chocolate is described as warm dark to milk chocolate brown with a white to golden or amber undercoat and highlights. A cinnamon is a rich light reddish brown with a golden to white undercoat. This can also be used to describe a ferret with light, tan guard hairs with pinkish or reddish highlights. Straight tan is a champagne. A silver starts out gray, or white with a few black hairs. The ferret may or may not have a mask. There is a tendency for the guard hair to lighten to white evenly over the body. As a ferret ages each progressive coat change has a higher percentage of white rather than dark guard hairs. Eventually the ferret could be all white. White patches on the throat might be called throat stars, throat stripes, or bibs; white toes, mitts (sometimes called silver mitts), or stockings go progressively further up the legs. A blaze or badger has a white stripe on the top of the head, and a panda has a fully white head. A Siamese has an even darker color on the legs and tail than usual and a V-shaped mask; and a self is nearly solid in color.

A male is called a hob, and a female is a jill. To some people, neutered males are gibs and neutered females are sprites , but these are new terms and aren’t as commonly used. A baby ferret of either sex is a kit. The most commonly accepted phrase for a group is "a business of ferrets". Some people spell it "busyness" instead. Another possibility, "fastening" or "fesnyng," is thought to be due to a misreading of "bysnys" long ago.

If you can’t tell whether you have a male or female, it’s probably a female. 🙂 Look on the belly of the ferret, about halfway between the tail and the bottom of the rib cage. If you see what looks like an "outie" belly button, it’s a male – and it’s not a belly button. Otherwise, look just in front of the anus for a second opening, perhaps with a tiny flap of skin. If you see that, it’s a female. To double-check, look at a once-used litter pan. Ferrets usually urinate and defecate in one "sitting," and because of the anatomy described above, males leave puddles a few inches in front of their piles, females right on top.