Not only can they be terribly destructive to the home and its furnishings, but all homes contain objects that can be harmful (directly or indirectly) to pet birds. These include mirrors, windows, walls, house plants, electrical cords, and items containing harmful chemicals.

Birds resting on open perches are usually content to remain there, and usually take flight only when frightened by a sudden movement or loud noise. Unfortunately, these "impromptu" flights are taken without a flight plan and birds usually wind up crashing into walls, doors, windows or mirrors because of their confusion and poor depth perception.

The major source of poisoning of pet birds is lead found in curtain (drapery) weights, curtain pulls, leaded and stained glass, fishing sinkers and ammunition carelessly discarded in ashtrays or dropped on the floor, costume jewelry, and in the lead wrapping around the tops of wine bottles, to name the most common sources. Most caged birds seem to have an affinity for this soft metal and love to chew on it. Poisoning results from eating even a small amount of lead. Lead poisoning can be successfully treated if diagnosed early enough.

Caged birds allowed unrestricted freedom in the home may eat house plants or chew on electrical cords, resulting in illness and injury. Some unsupervised pet birds chew on macrame, carpet and other similar fabrics and often swallow these materials, resulting in crop and intestinal impactions. Free-flying birds are also more vulnerable to injury from ceiling fans, hot stoves, and attack by pet dogs, cats and ferrets sharing the same household. It is wise not to underestimate the aggressiveness of our 4-legged friends, and to restrict contact between them and pet birds as much as possible.

Birds allowed unrestricted freedom and flight within the home may escape through open doors and windows. Most bird owners have the mistaken notion that their bird would never fly away and leave them. Unfortunately, birds that have escaped the owner’s home easily become disoriented when outdoors. This confusion makes return or capture of the escaped bird very unlikely.

The location of the cage and/or perch in the home is important. Some birds thrive in areas of heavy traffic, where they receive lots of attention and are part of all of the "goings on." Others seem to prefer more privacy and solitude. A pet bird should never be kept in the kitchen. In addition to the obvious gas fumes and occasional smoke from cooking food, there is another, much more dangerous, threat to birds in the kitchen. Super-heated Teflon and related brand-name non-stick pan coatings emit fumes that are deadly to all birds. This "accident" happens most often when someone inadvertently leaves a pan, coated with a non-stick surface, on a lighted gas or electric range burner. The pan becomes hot and the non-stick coating overheats, emitting toxic fumes. Birds that inhale these fumes die quickly.

There are several other considerations when allowing birds unrestricted freedom and flight within the home. Birds flying about may end up in the toilet bowl or in an uncovered pot or pan cooking on the stove. Free-flying birds tend to assume a more dominant posture in their relationship with people, and often become intolerably aggressive. 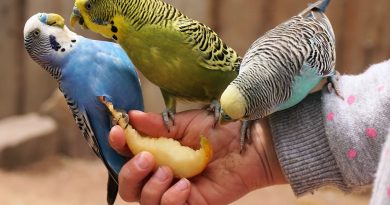 Caring for Your New Pet Parakeet

Nov 9, 2018 KristaLB Comments Off on Caring for Your New Pet Parakeet