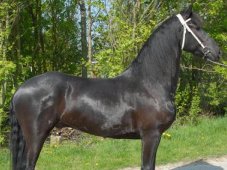 Now when a colt is gelded, physiologically he does not go from being a stallion to a gelding overnight. The day after castration, he still has just about as many hormones circulating in his system as he did the day before. And although he is a little sore when he walks, his mind is still pretty much in the same place it was before the vet arrived.

The day after the colt was castrated, I saw my client pull up to see her horse. I started for the barn so I could do the holding thing. By the time I got there, she was already in his stall, petting and loving on him, telling him how much nicer he was now that he was not a stallion any more.

People trust geldings. They have it in their minds that geldings are always safer, more reliable horses than stallions or mares. Now any time you generalize, you can always finds exceptions. But by and large, geldings are easier to handle because they do not have their minds on sex every few seconds the way stallions do. They do not have hormonal swings affecting their mood or territorial issues like mares. Stallions and mares are a whole lot more stressed than geldings.

So geldings, in general, are easier to handle because they have fewer distractions than horses of other genders. That makes it easier for less skilled riders to work with them. Unlike stallions and mares, they are neutral about who is in charge. That also makes them safer for less experienced riders. About the only thing geldings argue about is who gets fed first.

A gelding is not necessarily a more forgiving horse or easier horse to train just because he is a gelding. Personality-wise, every horse is an individual and you never know exactly what he is going to be like after he is gelded until the deed is done. Geldings seem easier to train because it is easier for their handlers to keep their attention. Since people view geldings as safer and they tend to view safer as better, they have a more relaxed attitude around geldings. A gelding feels that relaxed attitude and it helps him relax and be more trainable.

The age a colt is gelded makes a big difference in whether he acts like a gelding or acts like a stallion. If you want a gelding mind, it is a good time to castrate as soon as both testicles come down. There is a lot of discussion about how less testosterone will influence the colt’s growth but that is not something that really adds to the value of the horse, just to what he weighs.

People tend to get along with stags better than stallions because they believe that geldings are safer than stallions. However, a stag’s behavior patterns will often be identical to those of any stallion. There was an Arabian breeding stallion whose owners decided to castrate him and send him to Meredith Manor as a sort of semi-retirement. He continued to strike a "look at me" posture whenever a mare was around and he was always ready to argue if someone wanted to challenge him. A stag is a horse that acts like a stallion but does not have any money in the bank.

A stallion will often work more enthusiastically than a gelding but his rider needs the skill to keep his attention from leaving. A mare can be a really super partner when her rider understands how to work with her mind. Geldings are just nice, consistent guys that can be among the most fun horses you will ever ride and play games with.

The horse’s gender does not make a bit of difference, however, in how you approach training. No matter which gender you prefer, you need to start with groundwork like heeding to build a vocabulary of consistent, horse-logical pressures to communicate with the horse. The horse needs to work its way, step by step, up the training tree in order to build a solid foundation for whatever games the two of you would eventually like to play. Geldings may make the job a little easier but being a good ole boy does not excuse either them or their handlers from any homework.

Jun 29, 2017 admin Comments Off on Keeping a Horse’s Attention