Now my friend Ray was raising a few Morgans and when breeding time rolled around, he’d call me to help him handle the stallion. Little Brother was always very, very easy to handle. He had a favorite wife named Quaint. When she was in season and ready to breed, my buddy would hold Quaint on a lead line out in the pasture. I’d go to barn and bring Little Brother along. The stallion would nuzzle and tease and do his job then I’d take him back up to the barn. I never needed a chain shank or anything. Little Brother knew Quaint, she knew him, they liked each other and there was never any fuss.

One year Ray fell off another horse, broke his leg, and decided to skip breeding that spring while he healed. Somebody asked him about leasing Little Brother to use on his mares and that sounded like a reasonable idea to Ray, given the circumstances and all. Little Brother was leased to this other guy and, at end of breeding season, he came back home again.

The next spring Ray’s leg was fine, Quaint came into season, Ray took her took her to field, and I went and got Little Brother. This time, however, instead of going to nipping and loving her, he started eating grass. Quaint let Little Brother know in every way she could that she was interested in him but he just ignored her. Ray was pretty upset. He figured the stallion was ruined. But I was at the beginning of thinking about training from the horse’s point of view and I thought I knew what might be wrong. So I took Little Brother back to his stall.

When I got Little Brother back to his stall, I put chain under his chin and picked up a whip. I slapped and jerked and screamed and made a huge fuss. Sure enough, Little Brother got all excited and in no time at all, he was ready to breed Quaint before he even got out of stall door. So I took him back to the pasture, he served mare and then he went back to eating grass.

Now, in those days, everybody knew that every stallion in any barn was just naturally mean and ornery. If you didn’t knock ’em around and show ’em who was boss right from the get go, you were sure to get hurt. So I figured this other guy had probably handled Little Brother like he was afraid of him. I figured that he’d probably fought with the stallion to show his who was boss before he took him to breed. So the fellow taught Little Brother that a big fuss, there was going to be a party. But, horse-logically, Little Brother had also concluded that if there was no fuss, there wasn’t going to be a party. So each year we did a little less fussing in the stall and in a couple years, Little Brother was back to being the laid back breeding stallion he’d been before.

Horses are so very pattern-istic. The patterns or habits that they learn can work for you or against you. So it’s important to think through what you’re teaching a horse from the horse’s viewpoint. You can try to physically dominate a horse to control him or you can psychologically control him by becoming the safest, most comfortable place for him to be. One big difference between the two systems is going to be how events unfold when something physically scarier than you comes along.

When things get scary or confusing, you want a horse that responds to a familiar pattern that creates a feel of a safe place that he can go to rather than fleeing or fighting. That’s why we start our training out on the ground and under saddle using rhythmic exercises that create relaxation in the horse. When rhythm habitually creates a feel of relaxation in the horse, a rhythmic pattern becomes a safe place for both the horse and rider to go to whenever things start falling apart. Then the horse gets excited or upset and the rider goes to any exercise that reestablishes rhythm, habit will help the horse relax so he can listen to the next thing the rider asks.

This makes a lot more sense than using big bits and sharp spurs and going back to fighting over who’s the boss. But it took me a few years and a few horses before I unlearned my old habits of loud and startling communication with horses and learned a better way. If you or your horse have poor communication habits, be sure to allow yourself plenty of time to learn some new ones. 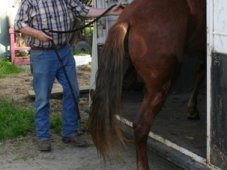