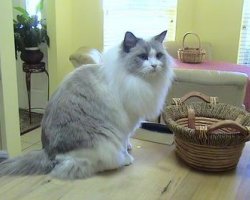 A bill making it illegal for a landlord in California to require their tenants to have their pets declawed or devocalized has been rejected by Governor Arnold Schwarzenegger.

Assembly Bill 2743 (AB 2743) would have imposed a civil fine of $2500 for each instance of declawing or devocalization as a result of a landlord-tenant agreement. Landlords would also not have been able to give preferential treatment to tenants with declawed or debarked animals or advertise in a manner designed to discourage applicants with animals that have not been declawed or devocalized. AB 2743 was authored by Pedro Nava of the district of Santa Barbara, and was passed with bipartisan support of 63 to 7 by the California Assembly in May and passed 21-12 by the California Senate in early September. However, the bill was vetoed by Governer Schwarzenegger last week.

"I support the goal of this bill, which would preclude landlords from making inappropriate medical decisions as a condition of occupancy. However, I cannot sign a measure that contains findings and declarations by the Legislature that are unsupported by science. In addition, this measure suggests that declawing should be prohibited for any ‘non-therapeutic’ reason, which would include the legitimate medical needs of a pet owner. Regrettably, this bill goes too far in attempting to deal with inappropriate demands by landlords," said Governer Schwarzenegger in his veto statement.

While the bill was supported by the California Apartment Association (CAA), the bill was not supported by the California Veterinary Medical Association (CVMA) and many commentators therefore expected the bill to be vetoed. The CVMA had problems with several key sections of the last version of the bill. Specifically, they say there is no evidence that declawing cats has unintended effects on their behavior. Critics have condemned the CVMA for looking after the financial interests of it’s members.

"I am very disappointed that the Governor vetoed my bill. Declawing and devocalization are complex surgeries that can have severe complications for animals, and emotional and financial consequences for pet owners. Cats often change their behavior in unacceptable ways after being declawed and some dogs develop scar tissue that interferes with their ability to eat. Sometimes these procedures are performed routinely," Pedro Nava, the author of AB 2743 told the LA Times after the bill was rejected.

Jun 29, 2017 admin Comments Off on Basic Hoof Care for Horses