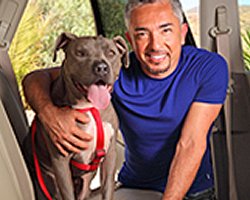 A partnership between Cesar Millan and Bark Buckle UP aims to highlight the dangers of traveling with pets and promote safer travel.

World-renowned dog behaviorist Cesar Millan has teamed up with pet safety experts, Bark Buckle UP to launch a new public service announcement, asking pet owners to take the pledge to "Be Smart, Ride Safe". The "Be Smart, Ride Safe" PSA features Millan and his second-in-command, Blue Pit bull Junior, who are helping to promote the Be Smart Ride Safe pet travel safety campaign. The PSA is being aired nationally to encourage individuals and corporations to take the pledge online to be safer with their pets.

"Pack leaders provide protection and direction," said Millan. "And when it comes to pet safety, protection is about prevention – that’s what this campaign is all about!"

Up to 300% more pets are traveling with their owners than in 2005, but Bark Buckle UP says that most drivers are not taking appropriate safety measures. Most pets travel unrestrained, increasing the risk of pet injury or fatality during an accident. Unrestrained pets also pose risks for the drivers. If an accident occurs while the car is moving at 35 mph, an unrestrained, 60-pound dog is capable of causing an impact of up to 2,700 pounds.

And, if the unrestrained pet survives the crash, he may impede or slow the progress of rescue workers, as they need to tend to the animal and the human victims. First responders nationwide have said that, "any time lost in the caring of accident victims [due to] the need to deal with a frightened or injured animal can and should be avoided". In addition, if a pet escapes a vehicle after an accident, it can pose many dangers to other cars and may in fact cause a second accident.

Jun 29, 2017 admin Comments Off on Important Vaccinations for Dogs