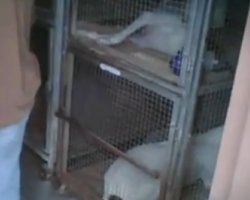 An investigation has highlighted what the the ASPCA® describes as "inhumane" conditions at a racetrack in Arizona.

New undercover video footage at Arizona’s Tucson Greyhound Park depicts muzzled greyhounds confined to small, stacked cages in dark rooms for extended periods of time. The footage also confirms that racing dogs are fed meat from diseased animals to reduce costs and denied proper exercise and human interaction. The ASPCA® (The American Society for the Prevention of Cruelty to Animals®) has described the conditions as "inhumane" and says that the video illustrates that animal cruelty in inherent in greyhound racing. The video was filmed by GREY2K USA, a non-profit organization dedicated to ending greyhound racing nationwide, and was released just before Christmas.

"As disturbing as this video is, it’s sadly not surprising," said Ann Church, senior director of ASPCA Government Relations. "The footage only underscores what we already know: Greyhounds endure lives of terrible confinement, kept in warehouse style kennels in cages that are barely large enough for them to stand up or turn around. The ASPCA is grateful to GREY2K USA for capturing these inhumane conditions on film and raising awareness about the inherent cruelty of dog racing."

In 2008, the Tucson Dog Protection Act was passed, mandating that dogs housed at Tucson Greyhound Park must be let out of their cages for at least six hours per day and cannot be fed raw, diseased meat. The undercover video clearly shows that the track is in violation of the law, and the ASPCA has urged the city of South Tucson to take immediate action to ensure compliance of city code.

Massachusetts, Rhode Island, and New Hampshire have all recently passed laws prohibiting greyhound racing, and 25 greyhound tracks have closed in the United States since 2001. The state of Arizona has struggled to maintain attendance at its one remaining track, and the ASPCA has urged Arizona legislators to follow in the growing trend and permanently outlaw dog racing in their state.