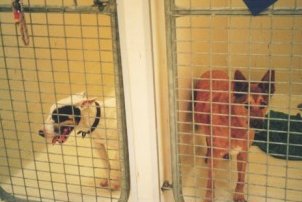 On April 27th the Pet Safety and Protection Act was introduced to the House of Representatives, proposing to prohibit the sale of dogs and cats by random source "Class B" dealers.

Republicans Phil English (R-PA), Mike Doyle (D-PA), and a bipartisan list of 32 original cosponsors want to target unscrupulous breeders and dealers that use methods such as stealing pets and deceptively responding to "free to a good home" ads and who later sell these pets to animal research laboratories. The subject was exposed to a nationwide audience through the broadcast on HBO of a documentary called "Dealing Dogs", in which the intense abuse and suffering of hundreds of dogs at an Arkansas Class B dealer was exposed.

While the subject of that film, C.C. Baird, has been shut down due to the efforts of Last Chance for Animals and the subsequent investigation by state and federal authorities, there are still 15 random source Class B dog and cat dealers in the United States, of which six are currently under investigation by the USDA, according to the Animal Welfare Institute.

Random source Class B dealers are licensed by the U.S. Department of Agriculture (USDA) to sell animals to research facilities. Dealers purchase or acquire the animals from random sources, such as auctions, trade days, flea markets, or "bunchers" – individuals who round up dogs and cats from questionable sources. The random source "system" makes it difficult for USDA to enforce regulations regarding the true source of each animal.

The Pet Safety and Protection Act amends the Animal Welfare Act to prohibit random source dealers from selling dogs and cats to laboratories and prevents stray animals, who may be lost family pets, from being sold to laboratories. The bill would continue to permit breeders to supply dogs and cats to labs, as well as permit research facilities to breed animals for their own use or to supply others. The legislation would also continue to allow registered public pounds or shelters that receive animals relinquished by their owners (with consent) to in turn provide those animals to research facilities if they choose.