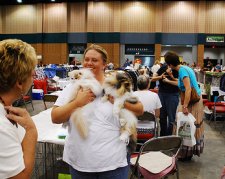 Santos beat 729 of the "world’s finest pedigreed felines" to claim Best in Show honors, his 39th win in 40 shows entered. Every cat entered in the show was evaluated by a team of six professional judges, and reviewed according to a written standard for its breed. According to the CFA web site, "the ideal Persian should present an impression of a heavily boned, well-balanced cat with a sweet expression and soft, round lines."

Santos has traveled to Belgium, Ukraine and the Netherlands on the show circuit and is scheduled to attend a show in Germany in January. Santos’ owners admit to spending up to $1000 every weekend during the show season (May to April). Born in Italy, he spent last summer in his native Venice with his breeder so his coat would grow thick in the cool air. When Santos is not traveling the world, Santos lives with his owners in Raleigh, North Carolina, where he enjoys four baths a week.

This year was the International Cat Show’s 20th anniversary, and featured the 40 CFA recognized breeds of pedigreed cats, including the Persian, Siamese, Maine Coon, Cornish Rex and Sphynx. As well as the formal judging competition, the show included a Feline Agility Competition, designed to "highlight the grace, athleticism and curiosity" which makes cat so much fun to watch in action; and a Breed Showcase, where a CFA judge handled 20 CFA breeds. There are more than 2 million pedigreed cats registered with the CFA.