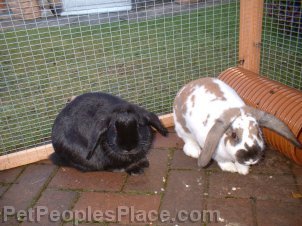 The UK's rabbit owners are being urged to be on their guard after a 300% increase in outbreaks of the potentially fatal disease myxomatosis.

Leading veterinary charity PDSA (People’s Dispensary for Sick Animals) has reported dramatic increases in incidence of the disease seen in three of its PetAid hospitals in Humberside, the West Midlands and the South East. Vets working in the charity’s facilities at Romford and Hull have reported rises of more than 300 per cent in the space of a year.

Myxomatosis can be transmitted via fleas, flies that bite and direct contact with infected animals. Its symptoms include listlessness and anorexia as well as swelling of the rabbits’ heads, eyelids and genitals. PDSA Senior Veterinary Surgeon, Sean Wensley, recommends that owners worried about the risk of disease to their pets should seek veterinary advice.

"The effects of the myxomatosis virus are very distressing to witness and are usually fatal. By the time clinical signs have developed, such as facial and genital swelling, it is often too late to be able to help affected rabbits. Myxomatosis is preventable through vaccination and protecting pet rabbits from disease and suffering should be a priority. I strongly advise owners to ask their vet about vaccinations, as well as how to minimise numbers of biting insects."

In the 12 months to date, PDSA’s PetAid hospital in Hull dealt with 30 cases of myxomatosis after handling only eight the year before. The situation was equally dramatic in Romford, which saw a leap from 12 cases of the disease to 43 in the space of a year. PDSA’s two PetAid hospitals in Birmingham have seen eight cases between them in the last 12 months. In the previous year, neither saw a single rabbit with the condition.

Jun 29, 2017 admin Comments Off on Interpreting Your Dog’s Body Language