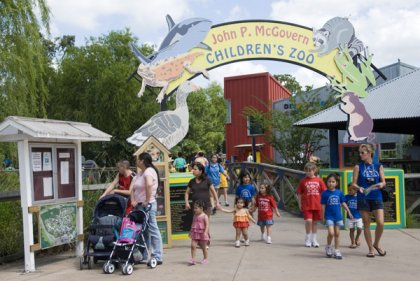 Houston Zoo is welcoming the arrival of its third St. Vincent Amazon parrot chick - an endangered species found only on a small Caribbean island.

"The chick hatched after 25 days of incubation and is being hand raised at the Zoo’s off exhibit Avian Conservation Environment (ACE) building," said Houston Zoo Bird Department supervisor Chris Holmes. "For the first 28 days Vincent was hand fed every two hours from 5 in the morning until midnight. He went home with me in the evening and came to work with me every morning," said Holmes. Vincent was transported in a specially made climate controlled carrier.

Found only on the Caribbean island of St. Vincent in the Lesser Antilles, the St. Vincent amazon is officially classified as an vulnerable species by the International Union for the Conservation of Nature, the IUCN. The current wild population of St. Vincent’s is estimated at 800 individuals, despite numerous natural hazards and human encroachment into their habitat. Prior to 1898, the parrots were fairly common. However, two natural disasters took a heavy toll on their population after 1898. A devastating hurricane struck the island and was followed by the eruption of the La Soufriere volcano that crowns St. Vincent’s northern landscape. Though the population has increased since these disasters, the slow reproductive rate of this species makes this a long process.

With the end of the breeding season approaching, Vincent’s parents will be on exhibit again at the Houston Zoo by early August.