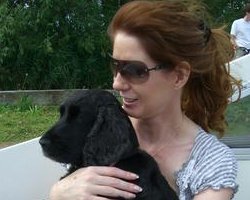 A new study has demonstrated just how much dogs rely on seeing their owners faces in order to recognize them.

The study, titled "Selective attention to humans in companion dogs, Canis familiaris", is to be published in an upcoming issue of the journal Animal Behavior. The research team, led by Paolo Mongillo from the University of Padua in Italy, discovered that dogs found great difficulty in recognizing their owner when they had their face covered, and that they prefer to look at their owner than a stranger.

In the experiment, dogs were exposed to their owner and an unfamiliar person entering the room and leaving through different doors. At the end of the test, the dogs were allowed to approach the doors. The researchers measured the average length of time the dog’s visual orientation was aimed towards the different targets. Dogs gave preferential attention to their owner, and specifically spent much more time gazing at the door through which their owner left the room. The researchers repeated the experiments when the head of the people entering and leaving was not visible. In these experiments, the amount of time spent watching their owner and the door through which they left the room decreased significantly.

"Most of the dogs gazed at their owners for most of the time and then chose to wait by the owner’s door. If you imagine a dog in a real setting in a city or anywhere in the middle of a crowd or a crowded space, you can see how the animal must have adapted to give preferential attention to its owner," Dr Mongillo told the BBC. He described how this behavior was entirely expected, but that it had simply never been definitively measured before.

Perhaps the most interesting implication of the study is how dogs have adapted to live with humans. In wild dog packs, individual members rely on body signals and scent from other animals in their social group, but this study suggests that domestic dogs have adapted to rely on other cues when living with humans, since their human owners are not able to communicate through canine body language.

Jun 29, 2017 admin Comments Off on Vaccinations for Rabbits

Training Your Cat: Lie Down