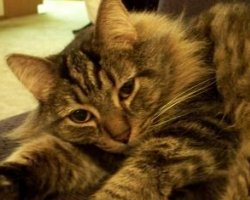 A new study demonstrates that healthy cats can behave as though they were sick when they are subjected to a change in their environment.

A University of Ohio study has shown that healthy cats were just as likely as chronically ill cats to refuse food, vomit frequently and leave waste outside their litter box – referred to as sickness behaviors – in response to changes in their routine. The study, titled "Sickness behaviors in response to unusual external events in healthy cats and cats with feline interstitial cystitis", is published in the January 1st issue of the Journal of the American Veterinary Medical Association. In the study, the researchers documented the behavior of healthy cats and cats with feline interstitial cystitis, a chronic illness characterized by recurring discomfort or pain in the bladder and often both an urgent and frequent need to urinate.

When the cats experienced what were called "unusual external events", such as a change in feeding schedule or caretaker, the healthy cats were just as likely to exhibit sickness behaviors as were the chronically ill cats. The two groups had the same number of sickness behaviors in response to unusual events, and both groups were at more than three times the risk of acting sick when their routines were disrupted. Previous research has indicated that a diagnosis of interstitial cystitis, known as IC, in cats is strongly associated with a number of other health problems. The fact that healthy cats exhibit some of those same problems in the face of stress suggests that veterinary clinicians should consider cats’ environmental conditions during assessments for health problems, researchers say.

"For veterinary clinicians, when you have a cat that’s not eating, is not using the litter box or has stuff coming up out of its mouth, the quality of the environment is another cause that needs to be addressed in coming up with a diagnosis. We are cautious about extrapolating these findings to the average home, but we will say that anyone who has a pet accepts the responsibility of understanding their pet’s needs and providing them. And what we’ve learned is that all cats need to have some consideration of environmental enrichment," said Tony Buffington, professor of veterinary clinical sciences at Ohio State and senior author of the study.

The environmental changes that the cats in the study were subjected to included the replacement of their major care-giver, changes in their feeding schedule, removal of food, restraint stress and the withdrawal of playtime and music. Before such changes, cats with IC were almost twice as likely to display sickness behaviors as healthy cats, however when environmental changes were implemented, sick cats were only 5% more likely to display sickness behaviors than healthy cats.

Jun 29, 2017 admin Comments Off on Restrain Your Counter Cruising Cat