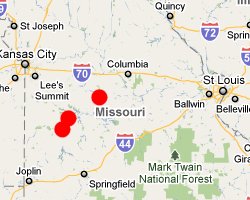 Animal rescue shelters in Missouri are struggling to cope with 64 dogs relinquished to the American Society for the Prevention of Cruelty to Animals (ASPCA®) last week.

In one case, 25 dogs were rescued from a puppy mill in St. Clair County, where the owner stated she was overwhelmed and had to reduce the number of dogs in her care. The dogs were relinquished to Half-way Home Pet Rescue in Cedar County, which contacted the ASPCA for assistance. The ASPCA team included four responders and a 60-foot-long animal transport trailer, which is stationed in Missouri and designed to meet demands of large-scale emergency situations. As part of the emergency relief efforts, PetSmart Charities? provided supplies, including pet transport carriers and crates.

In another case, the ASPCA rescued 17 dogs from a private residence in Osceola after a court order for removal of the dogs was issued because their elderly owner could no longer care for herself or the dogs, many of which had gotten loose in the community. The Lab/shepherd mixes range in age from four weeks to nine years and were living in a wooded, debris-filled area. In yet another case, 22 dogs were removed by the ASPCA, working under the authority of the Morgan County Sheriff’s Department, from a residence in Stover. The dogs included six newborn puppies and were a variety of breeds, including poodle/Yorkie mixes, Pomeranians, rat terriers, beagles, and Rottweiler/hound mixes. Many of the dogs suffered from untreated medical conditions and matted fur and did not have adequate food and water. ASPCA investigators also learned that some dogs had been shot and buried on the property, with 10 deceased dogs being recovered from gravesites.

The dogs from the Osceola and Stover properties are being housed at a temporary shelter in St. Clair and received full medical exams, treatment and grooming by a team of shelter professionals. Through its newly formed shelter response partnership, the ASPCA is working with Wayside Waifs in Kansas City to take 44 dogs and the Humane Society of Southwest Missouri in Springfield to take 15. These two organizations will work to place the dogs into adoptive homes.

The ASPCA is using these cases to highlight "Proposition B", also known as the Puppy Mill Cruelty Prevention Act, which will appear on the state’s November ballot. Proposition B promotes the humane treatment of dogs in Missouri’s large-scale commercial dog kennels, which will improve the lives of dogs by requiring large-scale breeding operations to limit the number of breeding female dogs to 50, as well as provide each dog with common sense standards such as sufficient food and clean water, regular veterinary care, adequate housing and space, and access to regular exercise.