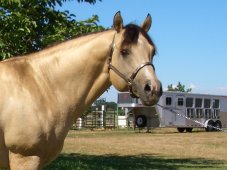 There is a "mythunderstanding" in the horse industry that men can handle stallions more effectively than women because they’re stronger. The reality of it is that horse training is a mental game played in a physical medium. It is not about strength at all. It doesn’t matter if the horse is five times as strong as you or ten times as strong as you. There is nobody strong enough to match strength with a horse. Heeding is a mental game that gets the horse on your side and working with you. It is not about physical strength.

When working with stallions, you do not do anything different than you do when working with any other horse. As a trainer, you are not a man or a woman. You are a presence. As a thinking presence, you understand what actions are horse logical in a given situation. And instead of telling the horse not to do something after he’s already started, you constantly keep his attention of what you want him to be doing in the first. If you have taken the time to become the same kind of a friend to a stallion as you would with any other horse, you can heed him around and do anything you want including handling him during breeding.

If you keep the horse’s attention and get your heeding going so well that the horse is used to staying at your shoulder ALL the time, you can heed your stallion right up to the mare when you are breeding and have no fight about it. You can walk your stallion right past a mare and have him pay no attention if you don’t want him to. And you never need to fight with him about anything. You have to mentally dominate the situation, not physically dominate the situation. You must earn the horse’s respect, not overpower him with strength.

I see a lot of people moving their horses around at the end of a lead rope but the horse isn’t really paying attention to them and they’re not telling the horse exactly where to put each foot and when to move it next. If you’re walking a stallion around without paying full attention to him, as soon as that stallion notices another horse and gets interested in that other horse, you’ve lost control.

Now you’re in a bind. You’re trying to regain control from a horse that doesn’t want to give up control. And when an animal as big and strong as a horse decides to leave, you have to come up with a real stopper. Too many people wait until the horse is too far into this process and then they start yanking and shanking and yelling and starting a fight. And when you fight with a stallion, what you’re fighting about in his mind is who gets the next mare.

When you take a stallion to a show, lots of times he gets all excited and thinks, "Oh Lord, this just might be a Texas bar!" So you just walk him around, heed him around, until everything is boring. But if you stop to talk to somebody and just leave him standing there, he’ll probably start to drop. That stallion starts daydreaming and has taken his attention off the fact that you are in control. That’s not his fault. It’s yours.

You need to get his attention back, remind him that you are in control, and you do that by quietly doing some heeding to move him around. Walk, stop, back, walk, just keep asking and changing what you’re asking for often enough that he has to put his attention back on you. When you get his attention back, he’ll put it away. If you want to talk to someone, put your horse away first and then go talk to them. There are three times when you stop paying attention to the horse that you are handling whether that horse is a stallion, a mare, or a quiet old gelding: never, never, and never.

If you have a stallion that bites, you don’t slap it or beat it. Meeting aggression with aggression never works. If you have a horse that bites and you try to slap it for biting, it will eventually learn how to duck your slap and bite you on the way down. Instead, just tie stabilize his jaw with a drop noseband to interrupt the biting before it gets started. If he’s real persistent, even with the noseband on, you can pinch his lip when he tries to put his mouth on you. After a while, biting won’t be part of his program anymore.

Stallions tend to react to situations the same way as human males which is to attack when they’re scared and to pout when they lose. And that’s exactly what they do. You can work a stallion to the point where he decides that life ain’t worth living and then he’ll just pout like a son of a gun. Sometimes you’ll have two or three days of pouting. But I don’t want to just pick on the guys. What mares do is different, but that’s another subject. It really doesn’t matter whether you have a stallion or a mare or a gelding. What you really want is a horse that you like doing what you like because it likes and understands you.

Jun 29, 2017 admin Comments Off on Horse Training: The Heart Exercise 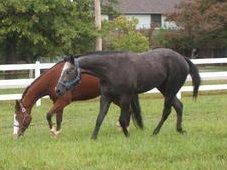