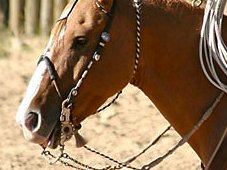 The truth is that many of the terms or code words we use are mythunderstood. Many riders "mythunderstand" the difference between aids and cues, for example, and we have talked about that. If you do not understand the difference, you may not clearly understand how to do what your trainer or a clinician asks you to do. And you will not understand why your horse trots off to the races instead of cantering when you apply what you think are the aids for a left-lead canter.

So when students come to Meredith Manor, we mix things up a little bit terminology-wise to get their attention and to get them thinking on a different track. We call our ground training system "heeding" because the term suggests that the handler should pay attention to the horse and the horse should pay attention to the handler. All the time. Stride by stride. Then, instead of talking about ‘applying’ aids (which, remember, some people think of as cues) we talk about heeding your horse. You heed a horse stride by stride using corridors of methodically applied directional pressures to cause the horse to feel a shape that you want it to take.

To review a little, a cue is a physical or verbal signal that the horse understands as ‘do this particular thing.’ Signals cannot be modified. They are like switches. They either are ‘on’ or ‘off’ or ‘do’ or ‘do not do’ something.

An aid is a pressure that helps a horse feel the shape you want him to take or the direction you want him to go or the amount of energy you want him to put into the deal at that moment. Unlike cues, aids can be modified. So you can apply an aid or a combination of aids with a subtlety that asks the horse not only to take a particular shape but also to go in a specific direction and at a specific pace, etc. As soon as he responds, you can modify those aids to ask that the next stride be just a little different from the last stride.

It starts to get tricky, however, when people "mythunderstand" aids as sophisticated cues. In our riding classes, we use pictographs to show students which combination of rein, leg, and seat aids they should apply to ask the horse for different gaits or movements. Those pictographs are a helpful learning tool but they can be the razor in the monkey’s hands if a student never progresses past the concept of pushing a certain set of buttons to get a certain response from the horse.

Heeding addresses this "mythunderstanding" of aids as cues. Since most students arrive here thinking they know what aids are, we just avoid using the term for a while. Heeding teaches students to apply methodical, horse-logical corridors of directional pressures. It uses some of what most people understand as ‘aids’ but it expands the student’s awareness of aids from just what they are doing to how they are doing it and then to how the horse reacts to it. Then they modify the ‘what’ and ‘how’ to influence the horse’s reaction in the next stride.

When we start working with a baby green horse, the typical aids we use to communicate with horses have absolutely no meaning. The horse has to learn the ‘meaning’ of each pressure individually before the handler can put them together in a sequence. Each horse is going to learn the meaning of the pressure, the shape it intends, at a different rate. So the handler cannot expect the same reaction from the same pressure applied the same way each time he or she uses it when working with a horse. And the same horse may feel different from day to day. The handler has to pay attention to the horse’s reaction to any pressure and modify it accordingly. And they have to remember that horses only learn new things that are one or two steps beyond what they already understand.

Let me give you an example from a recent beginning level training class. A student was introducing a green filly to basic leading. He used his body on her left side and the arena wall on her right side to create a corridor of pressures for her to work in. He created directional pressures by altering the direction he looked and the position of his shoulders relative to hers. He created speed pressures by changing the activity level of his feet. He carried a whip to create additional pressures as needed.

At first, the filly just barged right past him when he stopped. She did not understand what he was showing her. Part of the problem was the way the student "stopped." As she went past him, he slowed his feet but kept walking just a little bit. He corrected the activity level of his feet and made definite stops that clearly showed the filly, "Now I am going to stop moving my feet." When she still did not understand the response he wanted, he created a little more pressure on her by turning toward the rear, continuing to move his feet, and asking her to back up by alternately pushing on the point of one shoulder then the other with the butt of his whip. When he could feel she wanted to stop, he stopped moving his feet, took the whip pressure off completely, and started grooming and loving on her. The total release of all pressures, along with a little grooming, rewarded her. The light bulb went off as she started to make the connection between his feet stopping and getting to rest.

Their "corridor" was not perfect. She stopped with her hindquarters to the inside instead of stopping parallel to the wall. To correct that, the student could have carried his whip a bit closer to her side or farther to the rear to create more pressure on the left side of the corridor. However, he paid attention to the filly’s attention span and frustration threshold and left that refinement for another day. If he had tried to both stop and straighten her that day, she would have gotten confused or irritated or both. That day, he only introduced one concept, altering the direction and speed of his body language and creating pressure with his whip that, when released, got the message across to her that if she stopped her feet when he stopped his, she got rewarded with some rest.

This is the beginning of ‘aids’ as a language. The handler applies a pressure to show the horse what he wants, observes the horse’s reaction, and then modifies the pressure to make what is wanted clearer to the horse. Much later on, the handler can use a pressure the horse already understands to ask the horse to do something. But in the beginning, it is a slow dance. And since no horse or handler ever gets it perfect, they will keep on learning how to refine their communication as long as they work together.

When you heed a horse, you start paying attention to where you are looking, how you are breathing, where you mind is, the tension in various muscle groups, and lots of other subtle things in addition to the gross motor movements you are making with your body positions and legs and hands. You also start paying attention to all those subtle things in the horse. Instead of seeing the horse as skittish or uncooperative or stupid or ornery, you just observe his reaction to whatever pressures you put on him. Then you modify your pressures and try again until the communication is refined to where you want it.

If you only think of aids as ‘on’ or ‘off’ buttons, you are missing most of what makes them effective. You are using them as cues. After you use the language of heeding to teach a horse complex patterns of behavior, you can put any type of cues?clickers, voice commands, touch pressures with feet or hands or as you like it?on him that you want so that others can access your training in a simple way. 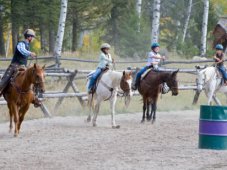