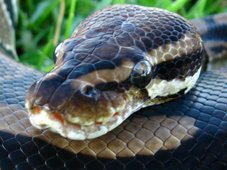 Adult ball pythons can reach lengths of up to 6 feet, but usually get no more than 4 or 5 feet. They can live for around up to 30 years in captivity. It takes most female snakes around 3 years to reach breeding size (males can breed when they are one year old), but they will continue to grow slowly over the course of their lives, once they reach three years of age. They come in a wide variety of color morphs and patterns, which are available from a large number of breeders.

Wild caught ball pythons are not very commonly available now, but captive hatched babies are very commonly offered during the summer. Captive hatched ball pythons come from wild parents. The eggs are collected, and placed into large pits in Africa, to hatch. These babies are often shipped straight out of the egg, and can be found in pet stores everywhere. They tend to be a bit more fragile than captive born and bred babies, but they can do well if treated properly. A fecal check should be done by a veterinarian shortly after you acquire the animal, to identify whether any parasites are present, and treat the snake to eliminate them. Internal parasites can build to lethal levels in captivity, due to continual re-infection, so they must be eliminated promptly. This is especially important with CH babies, as they are prone to carrying parasites, but since parasites can be easily transmitted by live rodents or by anything that has come into contact with the feces of an infected snake, any ball python can potentially have them. The vet check and fecal exam are relatively inexpensive, and well worth it to safeguard your pet’s health.

Baby ball pythons will generally be shy, docile, and will hide their head defensively. Some younger snakes may be snappy, usually from hatching to 3 or 4 months old, but calm down and become docile later on. Keep in mind that animals have individual personalities, and it’s always possible to get a very defensive, overreactive snake that will bite, or a very outgoing and calm animal – the temperament most ball pythons have isn’t the temperament they ALL have. Ball pythons rarely defecate or musk as a defense mechanism. If you work with them and handle them gently for 10 to 20 minutes or so every day, they will become used to you, and will become less defensive or frightened. Do not begin handling your python until it is eating regularly.

Bites from a ball python bleed, because their teeth are needle sharp and quite long, but they will not be very painful. Ball pythons are not venomous. A serious bite from a fully grown adult python may require medical attention, in some cases. Never pull away or try to pull the snake away if you are bitten – this will make the wound much worse, even to the point where it may require stitches. It may also injure the snake or break its teeth. Gently coax the python to release you on its own by moving its coils off of its head if necessary, and tapping it on the nose, or spraying water on its nose. Keep as still as possible, as pythons instinctively constrict their prey until it stops moving. Most defensive bites are released immediately. Most accidental feeding bites involve constriction, and may take a bit longer. The snake will let go once it realizes it made a mistake.

When you first bring your snake home, leave it alone for at least 1 week, without handling it, to allow it to settle in and recover from the stress. Then, you may offer it food – when it eats, leave it alone for at least one full day afterward, so that it can digest its food. Handling soon after eating may cause a snake to regurgitate its meal. Never handle a snake that is not eating well, or is ill, unless absolutely necessary. Handling is very stressful for reptiles, even if they are tame and used to you.

If a hatchling snake goes longer than 4 weeks without eating, re-evaluate your husbandry. Are the temperatures correct at all times? Does the snake have small, close hiding spaces on each side? Has it been left alone? Was it eating before you got it, and if so, what? (Try feeding it what it has eaten before). If none of that solves the issue, seek veterinary attention promptly. For adults, seek attention if the snake goes without eating for more than 8 weeks. This is a longer period of time than many other snake species, as ball pythons have a slow metabolism. Males may cease eating during the fall and winter months, but you will come to know your snake’s habits over time – if its pattern of behavior changes, assume that something is wrong, and act accordingly. Monitoring your snake’s weight is useful as well. A snake that is losing a lot of weight needs an immediate vet check.

To maintain it in the long term, have your snake checked by a veterinarian once a year for parasites or other health problems. If you notice your snake behaving abnormally, particularly if it stops eating, or seems less active than usual, seek medical care for it immediately. Reptiles do not usually show illness until they are seriously ill. Treated quickly, most ball python illnesses are not serious, the majority being related to parasites or to an infection, but if left for a long time, they can become life-threatening and difficult to treat.

Some ball pythons may stop eating for a week or so before shedding their skin, something they will do several times a year (more when they are young). Before shedding, the snake’s colors will become faded and dark, and its eyes will become cloudy. The snake is nearly blinded by this pre-shedding condition, and it may be irritable as a result. A snake "in the blue" (close to shedding) should not be handled, as the new skin beneath its old one might be damaged. A snake’s skin should come off in one intact piece. If it does not, the humidity in the cage is too low. Adding an airstone hooked to an air pump in its water dish may help raise the humidity. You can also mist several times a day with a spray bottle. Skin retained on the eyes or in other areas may be gently removed, after the snake has been placed in a plastic box (with air holes) and wet paper towels for a few hours. It should come off easily – if it does not, don’t pull hard, as you may injure the snake. A piece of scotch tape can be used to remove eye caps, after soaking, by wrapping the tape around your finger sticky-side out, and very gently rolling it across the eye cap – if they do not come off easily, take it to a vet to have the skin removed. Skin stuck around the snake’s tail can cut off circulation, and lead to loss of the tail. Retained eye caps can lead to eye infections, so it’s important to inspect the skin every time your snake sheds.

With the proper care, your ball python should thrive problem free for its full lifespan of up to 30 years.

Safe Handling: Wash your hands after handling any reptile or other pet, or handling or cleaning the inside of the cage or its furnishings. Never place a constrictor snake around your neck, as they may tighten their grip to avoid falling. Never permit children to handle a reptile without close supervision. 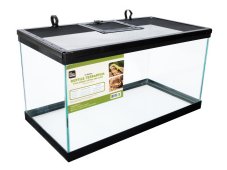 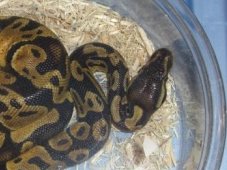 Jun 29, 2017 admin Comments Off on Health of Ball Pythons 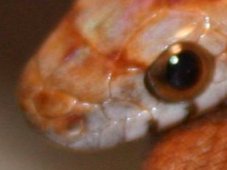