Physical Fitness
As kitty matures, she’ll visibly start to slow down and won’t be interested in playing or exercising nearly as much as she once was. Exercising and keeping limber actually helps common conditions such as arthritis, and also stimulates the mind as well. Make sure you spend time each and every day trying to get your older cat to MOVE! Entice her to run around a bit (although she won’t run as fast as she used to) and chase a string or a ball. Or chase her from room to room of the house. Any way you can get her interested in exercising is well worth it!

Rotate the Toys
Although cats like familiarity, simple things such as rotating toys can bring excitement into their lives. You should encourage your cat to play with her toys. Leave some of them out for her to amuse herself when you can’t be with her, and also keep some put away that she can play with during special times. Two days without seeing kitty’s favorite catnip mouse will probably make it seem brand new to her-and make you a hero for getting it out for her.

Couch Potato No More
Just as television entertains humans, cats can also become mentally stimulated while watching or hearing things of interest to them on the screen. You can get special videotapes for your cat that feature birds, mice, and other creatures (considered prey to kitty), and watch your furry friend perk up when Cat-TV is turned on!

Old Cats and New Tricks
Who said you can’t teach an old cat new tricks? Keep kitty’s mind in mint condition by teaching her new tricks. Whether you teach her to shake paws with you or train her to stand up on her hind legs on command, winning your praise-and hopefully a tasty treat-will make her want to learn new tricks!

Conquering boredom is probably the most important part of exercising your senior cat’s mind. Remember that just because your feline is getting older, it doesn’t mean she won’t want to experience new things. In fact, when your cat begins to look forward to spending quality time with you that will lead to the greatest mental exercise of all. 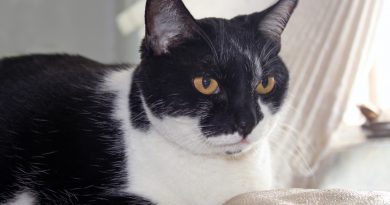