Some people claim that 99% of blue-eyed white cats are deaf. This is inaccurate because blue-eyedness and whiteness can both be caused by different genes. It all depends on what genes the cat has inherited. These are the actual figures from scientific studies around the world. The percentages are given in ranges because results are different in different areas, partly because of the different genes found in the cat population. Where a cat is classed as deaf, the deafness may affect one or both ears. 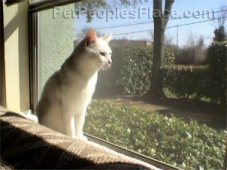 There is a known link between white coat color, blue eyes and deafness – but since the coat and eye color can be caused by different genes it means that only some blue eyed whites are deaf. There is a gene/gene complex which causes white coat and blue eyes; it is linked to deafness, but not all cats get white coat and blue eyes from this particular gene. These cats have a reflective layer called the tapetum in the eye (green eye with flash photography), differentiating them from the Siamese blue eye.

If the cat is a Foreign/Oriental White, it carries the gene for ‘Siamese Blue Eyes’ which is not linked to deafness (the gene for Siamese Blue Eyes is linked to cross-eyes instead). Siamese blue eyes lack a reflective tapetum and give red-eye with flash cameras. Random matings can mean that this gene sometimes appears in non Oriental-looking cats which have Colorpoint cats in their ancestry.

Albino cats are also white. True albinism causes pinkish eyes, but some albinos or partial albinos have pale blue eyes. There are too few albino cats studied to draw firm conclusions, but this mutation is not necessarily linked with deafness. It is also hard for a cat owner to determine whether their cat is a blue-eyed albino cat rather than an ordinary blue-eyed white.

There is also a gene for blue eyes which is inherited separately from coat color. This is the gene responsible for the Ojos Azules breed. If the cat is white colored, there is no easy way of telling whether it has the blue-eyed-deaf-ear type gene or the Ojos-Azules-blue-eyes type gene. It’s only possible to tell that a cat has this particular gene if the cat is non-white and has blue eyes.

Genes for blue eyes independent of coat color may be more common than previously realized. I have encountered three blue-eyed random-bred cats (one ginger, one silver tabby, one brown tabby) in one UK town between 1989 and 1995. This may be the same gene as Ojos Azules, or it may be due to different gene mutations. Other types of blue eye are being discovered in all-white cats in Asia, the blue is different than Siamese Blue Eyes, but does not seem to cause deafness.

The white coat can be caused either by a gene for white coloration or by a gene for ‘white patching’ – sometimes the white patching is so extensive that the cat appears solid white. If the white cat exhibited a few colored hairs or a smudge of color on its body (usually on the head) as a kitten, then it should have normal hearing even if it has blue eyes because it has inherited a non-deafness causing gene for white coat!

Blue-eyed bi-color cats occur and the more white they have in the region of their eyes and ears, the more likely they are to be deaf. This is because one of those genes for white affects the development of both the eyes and ears – it causes lack of eye pigmentation (i.e. blue eyes) and deafness – and since the eyes and ears are close together, if that gene affects that area of the body, it is likely to affect both sense organs (hence odd eyed whites may be deaf on the blue-eyed side).

Congenital deafness can also be caused by a variety of hereditary factors, just as in humans. Due to random mutation or the wide gene pool, cats of any color can be born deaf (probably less than 1%) – including orange-eyed whites. Hence deaf white cats with non-blue eyes can occasionally appear and in these cases the deafness is not linked to coat color. Deafness can also be caused by illness or injury, so a person adopting a deaf cat may not know whether the cat was born that way or became deaf later on.

There are also green-eyed white cats, the Russian Angora is green-eyed and white is a favorite color. Green-eyed white cats have a lower incidence of deafness than blue-eyed white cats because the gene for white they carry does not normally affect their eye color. It is similar for orange eyed whites; they rarely have congenital deafness. Genetic expression is very variable and orange-eyed/odd-eyed/blue-eyed whites are interbred in many breeds – hence up to 20% of non-blue-eyed, white cats may have some degree of hearing impairment depending on what gene is causing them to have a white coat.

So overall, blue-eyed white cats stand a higher than usual chance of being deaf; but they are not guaranteed to be deaf. Odd-eyed white cats may be deaf on the blue-eyed side. If you have a deaf white cat, it is not advisable to breed from it as this would pass the trait along. Deaf white cats are banned from exhibition or breeding by some fancies in Europe and there is a move to reduce or eliminate this trait from British breeding lines of various breeds. Deafness can cause problems because a cat cannot hear danger approaching. It can cause problems to breeders because deaf female cats cannot hear their kittens crying out and may neglect them. Deaf kittens cannot hear their mother calling to them and may get lost.

FAQ: Is a Siamese Right for Me?

Cat Ultra-Typing – A Breed Too Far?