To litter-train your ferret, start him out in a small area, perhaps his cage, and expand his space gradually as he becomes better trained. If it’s a big cage, you might need to block off part of it at first. Fasten the litter pan down so it can’t be tipped over. Keep a little dirty litter in it at first, to mark it as a bathroom and to deter him from digging in it. Don’t let it get too dirty, though; some ferrets can be pretty finicky about their pans. Likewise, ferrets and cats often don’t like to share pans with each other. Most ferrets won’t mess up their beds or food, so put towels or food bowls in all the non-litter corners until your ferret is used to making the effort to find a pan. 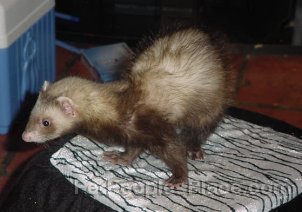 Bedding that has been slept in a few times and smells like sleeping ferret will be even better than clean bedding for convincing a ferret that a corner is a bedroom instead of a bathroom. Ferrets generally use their pans within fifteen minutes of waking up, so make sure yours uses the pan before you let him out, or put him back in the cage five or ten minutes after you wake him up to come play. When he’s out running around for playtime, keep a close eye on him, and put him in his litter pan every half hour or so. Whenever your ferret uses a litter pan, whether you had to carry him to it or not, give him lots of praise and a little treat right away. Ferrets will do almost anything for treats, and they’re fast learners.

Within a few days, your ferret will probably be faking using the pan, just to get out of the cage or get a treat. That’s okay; at least it reinforces the right idea. Positive reinforcement (treats and praise) are usually much more effective than any punishment, but if you need one, use a firm "No!" and cage time. Rubbing the ferret’s nose in his mess won’t do any good. He can’t connect it to it being in the wrong place, and ferrets sniff their litter pans anyway. As with all training, consistency and immediacy are crucial. Scolding a ferret for a mistake that’s hours or even a few minutes old probably won’t help a bit. If your ferret’s favorite corner isn’t yours, you have a few choices. could put a pan (or newspaper, if it’s a tight spot) in it; ferrets have short legs and attention spans, so you’ll probably need several pans around your home anyway.

Otherwise, try putting a crumpled towel or a food bowl in the well-cleaned corner, making it look more like a bedroom or kitchen than a latrine. "Accident" corners should be cleaned very well with vinegar, diluted bleach, or another bad-smelling disinfectant (don’t let your ferret onto it ’till it dries!), specifically so they don’t continue to smell like ferret bathrooms but also as a general deterrent. For the same reason, you probably shouldn’t clean litter pans with bleach, certainly not the same one you’re using as a deterrent elsewhere. Urine which has soaked into wood will still smell like a bathroom to a ferret even when you can’t tell, so be sure to clean it very well. Although almost every ferret can be trained to use a litter pan, there is individual variation. Ferrets just aren’t as diligent about their pans as most cats, so there will be an occasional accident.

Even well-trained ferrets tend to lose track of their litter pans when they’re particularly frightened or excited, or if they’re in a new house or room. In general you can expect at least a 90% "hit" rate, though some ferrets just don’t catch on as well and some do considerably better. At least ferrets are small, so their accidents are pretty easy to clean up. Finally, if your ferret seems to have completely forgotten all about litter pans, you might need to retrain him by confining him to a smaller area or even a cage for a week or so and gradually expanding his space as he catches on again.

Jun 29, 2017 admin Comments Off on Feeding Your Pet Ferret