Please note: Not all of these vaccinations are available in the US at the time of writing.

There are three common diseases which may affect your rabbit, only two of which can be vaccinated against. There is no vaccination for Pasteurella. This bacteria can cause a range of ailments from colds to abscesses. Healthy rabbits are unlikely to be infected.

Diseases Your Rabbit Should be Vaccinated Against:

Myxomatosis
This disease was originally used to control the rabbit population in France, but from there spread across the European continent, even to Britain, and over the Atlantic ocean to the Americas. Some irresponsible farmers have used the disease more recently for controlling the population on their land. The virus grows in the skin of rabbits and is transmitted by blood-sucking insects (often the mosquito). Sometimes two weeks can pass from the introduction of the virus to symptoms being displayed. Initial symptoms are inflamed eyes with a discharge, and later a swollen face and breathing difficulties. In general, a severe infection will result in death.

Viral Hemorrhagic Diseases (VHD)
Several thousand rabbits have died from this in UK. It can be transmitted on the clothes of people for up to three months, and also by using contaminated food and bedding. Symptoms include nose-bleeds, internal bleeding (lungs, gut and urinary tract). Death will usually occur in half of infected animals, sometimes occurring so quickly that no illness was apparent to the owner. 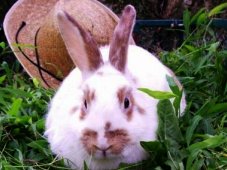