Why are they called Bearded Dragons?

Because of their ability to puff out the skin under their chin and turn it dark so it looks like a beard. They are also called Beardies or abbreviated as BD.

How much do Bearded Dragons cost?
I have personally seen them sell for as little as $15 in bulk price to as much as $900 for a colorful adult female. Prices depend on sex, size, color, age and lineage. Just remember that the price of the Bearded Dragon is only the beginning. You still need to buy the cage and all the supplies. That can run about $200+ depending on your choices. 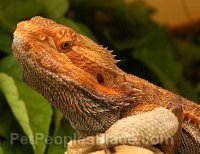 Do they bite?
Any animal with teeth can bite. If they are handled properly they generally do not bite. Their teeth are not sharp and pointy so if they do bite it is more pressure than puncture. Some BDs go through a stage (like children) where they try to push their limits to see how far they can go. They may puff their beard out and posture themselves to see if you are scared of them. That stage usually does not last more than a few weeks to a month.

How big will my Bearded Dragon grow?
It varies due to many factors and they all grow at different rates. With proper husbandry, a Bearded Dragon of good genetic background can grow to between 16"-22"+. Just like people, they grow at different rates and have growth spurts where they grow so fast you can almost see them grow. Some factors that can influence the growth rate of a Bearded Dragon include: Genetic background, cage size, amount and type of food, competition for food, amount of light, type and amount of UV light, proper vitamins and supplements, Being raised indoor or outdoor, stress levels and the general happiness of the animal.

Is it safe to have a Bearded Dragon with a small child?
Keeping any animal with teeth and nails with a small child should only be done under close parental supervision and only after determining the temperament of the animal. Bearded Dragons are generally calm and docile once they reach sub adult size. Once acclimated to being around people and being handled they are for the most part friendly and gentile. My children and their friends have been handling Bearded Dragons since they were only a few years old and never a mishap. It is important to wash hands with an antibacterial soap both before and after handling.

How much attention do they need?
In the wild they can live out their lives alone. They do not need social interaction but I feel they do enjoy it. The more you handle your Bearded Dragon, the more tame he will be. You can walk around the house and watch TV with a Bearded Dragon on your shoulder to keep you company. It is important to feed them and clean their cage daily. 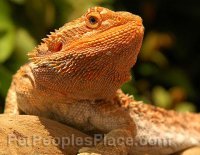 Are they social creatures, do they need company?
Bearded Dragons are not social creatures. People may project their emotional interpretations on them but they are generally perfectly content living a life of solitude. They do have a social structure for mating and communicating with each other. Head bobbing is the most often noticed means of communication. It is used to convey dominance. The arm wave conveys submissiveness.

When I hold my Bearded Dragon he squirms and scratches me. Am I doing something wrong?
Do not hold him! Let him hold you. The tighter you squeeze the more he will fight. Support him, do not try to restrain him, just let him hold onto you. Make sure he has a firm footing, letting him grab onto the front of your shirt/on hold onto your shoulder will make him more comfortable. Small BDs are usually wilder than sub adults or adults. When they are small, let them hold onto your fingers.

What kind of Bearded Dragon do I have, what morph is this?
Bearded Dragons come in all different colors and patterns. Normals are browns and dark earth tones, some light patches of white or off white. Some breeders give names to colors and patterns as a marketing tool. A red or orange Bearded Dragon may be called a Blood or my line, a Florida Orange. Colors include Snow/Grey, Red/Orange, Translucent, Albino, Citrus, Green, Yellow/Gold and various combinations. Another color morph is called "hypo" short for hypomelanistic. This simply means a reduced amount of melanin or black coloring. Many Bearded Dragons that have a light or pastel color will be sold as hypos. Those with almost no color and clear nails are often marketed as Leucistic. This is a misnomer as there have yet to be any true Leucistic Bearded Dragons that I am aware of.

Phenotype and genotype is the difference between what a Bearded Dragon looks like physically and what they are genetically. Just because a Bearded Dragon is a certain color, does not make him a particular morph. If two orange Bearded Dragons have a yellow offspring, even though the color is yellow, he is of orange lineage and will probably throw more orange babies than yellow. The yellow is a fluke. This is why people who breed for color charge more. They are selling animals that genetically have better odds of producing a particular color and a better chance that offspring will grow up that way too.

I bought an orange Bearded Dragon but he is not orange. Did I get ripped off?
Probably not if you purchased from a reputable breeder. Bearded Dragons can have dramatic changed in color over their first year or so. I have seen bright animals turn dull and drab brown animals turn bright colors. It is very possible and not uncommon for normal Bearded Dragons to give birth to colorful babies. The question is, will they stay that way and can they pass that color on to future generations. Bearded Dragon genetics is still a bit of a mystery. Two things we do know is that line breeding is BAD and can cause an abundance of problems and second, by breeding multiple generations of animals with a particular color trait, that color is more likely to be passed on. The hard part is finding a pair of Bearded Dragons with the color trait you want that are not related.

What are the dots on the underside of my Bearded Dragons back legs?
They are called femoral pores. Sometimes they are more pronounced on males but this should not be used as a sexing method. It is believed that they are used by the male to get a better grip on the female for mating.

My Bearded Dragon escaped from his cage now he is lost. Can I use food to catch him?
A Bearded Dragons first instinct is to hide. He will probably not come out looking for food readily especially when people are around. If you have hard wood or tile floors you can sift flour onto the floor than when they are out they will leave tracks that you can follow. Try looking in low dark places, they generally wont climb up things as much as crawl under and into things. If you have potted plants, check to see if they have dug a hole in them. They generally don’t go far. Look inside furniture. They get under a couch and end up exploring the springs and padding.

Is my Bearded Dragon a boy or girl?
Not all BDs sex easily. Some can even fool experienced breeders. It is more difficult to tell with juvies than with adults. Try placing the animal on your open hand (your palm up). Then with the other hand lift the tail and bend it towards the head but not to far. With the tail pulled forward, look for the hemipene bulges on either side of the base of the tail. If they have 2 bulges, it’s a boy, if not they may be girls or you may not be able to see them yet. Thin tails make it harder to tell. 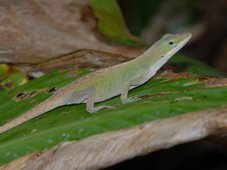 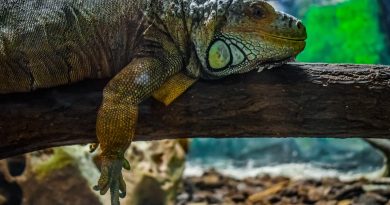 Oct 30, 2018 KristaLB Comments Off on Do Iguanas Make Good Pets?