However, weaning is both natural and necessary. In the wild, a mares often become pregnant again so have to wean the foal to have available resources to supply the new life growing inside her. In a domestic situation, it’s up to us to take steps to start the weaning process.

Steps to be taken before weaning:

Foals are usually weaned at about four months old. Those that spend a lot of time exploring away from their mother and playing with other youngsters will have less trouble during weaning. Sometimes, in the case of orphaned foals, weaning has to happen earlier.

Weaning can be done in more that one way, depending on the what you have available. 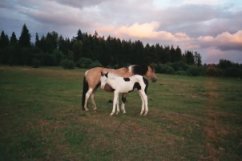 It has been shown in studies that foals who suffer too much stress when being weaned can lose their appetites and lose weight… then when they recover have a growth spurt. This can cause developmental orthopedic disease (DOD), in which bones and joints begin to grow abnormally. Possible causes are:

Foals which have little stress during weaning grow evenly with height and weight increasing in steady increments. This smoother growth pattern makes them less susceptible to DOD.

Other problems can occur when foals are weaned and under undue stress:

Before you wean put together a plan. It will take her a few days to "’dry up" , so she will be sore and grouchy. Don’t milk her out since this encourages continued milk production. If she is in good condition physically you may try reducing her grain ration for a few days to help her out.

Weaning the Foal in Hot Weather

For those of us with foals born this spring, it is weaning time. This is a stressful situation for both mare and foal, not to mention the owner who has to listen to all the whinnying and look at those pitiful foal faces! Usually we wean at 5-6 months. But, the weather is so hot (100+ for days and days) here in Oklahoma that when we often have to wait. There is no reason to cause additional stress because of the weather when a couple months won’t make that much difference. If you are preparing to wean, please take into consideration the weather and other factors. It is easy to lose a foal due to stress in these circumstances.