Keeping him out from under my feet has been a relatively easy thing to do, using the "slot machine" principle of learning. 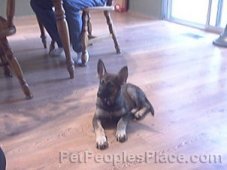 I have a small kitchen that leads directly to the dining room. The kitchen is tile floored, the dining room carpeted. Pierce only gets a taste from the kitchen if he’s laying with his front legs on the tile, the rest of him on the carpet. This keeps him out of my way, but his head over the tile so any messes are easily cleaned. What he’s learned is that if he’s not laying down in exactly that spot he gets nothing – ever. Nothing! No food, no attention. Not even negative attention like hearing me yell "get out of here!".

If he is laying on that spot he might get something, or he might not. This is why people dump their hard earned money into slot machines. They might go home broke, but then again, they might hit the jackpot. If they don’t put any money at all into the machine, they are, for sure, not going to be rewarded. This is Pierce’s feeling about his kitchen place. Pick a spot for your dog that keeps him out of your way during meal preparation or dinner time. In the beginning, reward often whenever he’s in that spot. You’ll know that he’s gotten the hang of the concept when he goes directly to that spot as soon as you go into the kitchen. When that happens, reward heavily (the jackpot!).

The next time, reward after he’s been on the spot for 30 seconds, the next time wait one minute. Continue to increase the time span until he’ll stay on his spot for a full two minutes before getting rewarded. When that happens start staggering the times. One time he may get a reward as soon as he gets to his spot, another time it might be five minutes. If he decides not to wait there, that’s fine – no rewards. It won’t take long for him to figure out that being on the spot doesn’t always get a reward, but being off of the spot never gets a reward. He’ll choose to take his chances on the spot.

Pierce gets to have a taste of almost anything I’m having – no onions, no spicy foods, no sugar. Breakfast is the least likely time that he’s going to be sharing, but I do give him an egg now and then. You don’t have to share your food with your dog, you can keep a handful of Cheerios or puppy sized dog biscuits ready and toss one at a time. Whatever you give him, remember to adjust his regular meal to allow for the extras.

Jun 29, 2017 admin Comments Off on Teach Your Dog to Sing Christmas Carols