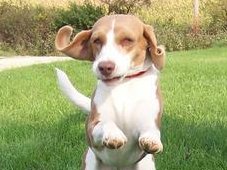 Hendrickson is convinced of the benefits of off-leash play after seeing how happy it makes Riley and her other two dogs – and how well behaved the dogs are in the house afterwards. She’s started a dog daycare business, Downtown Dogs Minneapolis, where pups play off-leash. She tells clients that off-leash play may help correct many behaviors at home, such as destructive chewing or digging, which could result from boredom or lack of exercise.

Hendrickson is also the health and safety expert of Dog Grounds, a non-profit in Minneapolis that fights for more public land for off-leash play. She’s part of an urban movement that has caught on from New York City to Seattle, in which dog owners have answered leash laws by fighting for more off-leash parks. Dog owners also set up "playgroups" where pets can romp and socialize. Whenever you put two or more animals together, however, there are risks. Here’s how to make sure that off-leash play is a positive experience for your pet:

Not all dogs are cut out for dog parks, says Robin Bennett, a dog trainer in Stafford, Va., and author of Off-Leash Dog Play: A Complete Guide to Safety and Fun (Dogwise). "The best thing to ask yourself is, ‘Does my dog enjoy the company of other dogs?’" Bennett says. "Just as with people, some dogs prefer to have just one or two friends, while others are more like social butterflies."

When starting out at a new playgroup or venturing to a new off-leash park, look for signs of stress in your dog, Bennett advises. "If the dog’s body stiffens up, it may be a bit worried," Bennett says. Another sign of stress is if the dog was formerly panting with an open mouth and suddenly stops and closes its mouth. "The dog may be holding its breath and saying, ‘I’m not sure of this,’" Bennett says.

Find Playgroups in Your Area

There is a growing variety of off-leash parks and playgrounds in communities around the country. Most city or county governments will have information on their websites about public parks that allow dogs to be off-leash. In addition, websites such as "Offleash meetup" allow you to search for groups or locations by zip code. If you can’t find an organized playgroup, ask your veterinarian, breeder, or owners of other dogs that your pup sniffs during its walks. If you have a fenced in yard, you might even consider starting such a group yourself.

Introduce your dog to off-leash slowly If your dog has never been to an off-leash park before, avoid peak hours. "The first time you bring your dog, go at a time when it isn’t very busy – usually early in the morning or on a weekday," suggests Hendrickson. "This way, your dog can sniff and explore on its own terms."

Watch for Stress or Aggression

Monitor your pup closely for a reaction to other dogs. Healthy play behavior involves exaggerated and repetitive movements, Bennett says. These may include chasing, jumping in the air, moving quickly to the left or right and bowing down with the front paws.

Be on the alert for dogs that become rough or aggressive. "Any time two dogs are off leash together, there is a risk of injury," Hendrickson says. Cuts and scratches are likely. However, bullying is a possibility at dog parks. It can be difficult to spot because dogs bite and wrestle and pin each other in play. Hendrickson recommends the "Bully Test." Remove the alleged aggressor and watch the reaction of the "bottom dog" to see if it continues to try to play or takes the opportunity to get away. If your dog wants to flee, it’s time to leave.

A dog trainer or other expert sometimes sponsors dog daycare situations or organized playgroups. At other times, dog owners are on the honor system. You should abide by the following general rules:

Crate Training Your Puppy or Dog

Jun 29, 2017 admin Comments Off on Crate Training Your Puppy or Dog