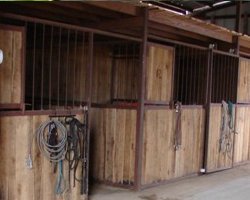 The World Organization for Animal Health (OIE) reports that 50 horses at a stable in Swindon have been exposed to a highly infectious equine disease.

Equine Infectious Anemia (EIA), commonly called "Swamp Fever" by horsemen, is caused by a retrovirus similar to the HIV virus is and transmitted by horse-flies, mosquitoes and other blood-sucking insects or by contact with bodily fluids. While the risk of transmitting the disease is greatest when an infected horse is ill, as the blood levels of the virus are then highest, infected horses remain infectious for life, and are therefore normally euthanized or permanently quarantined to prevent spread of the disease.

While the disease is endemic across much of the Americas, Russia, Asia and parts of Europe, this is the first case of the disease in the United Kingdom since 1976. A total of 50 horses of mixed ages were exposed to the virus at a stable in Swindon, where two positive mares were living. One of the infected mare’s demonstrated a "mild increase in temperature" but no other clinical signs. The infected horses had recently been imported from Romania and were euthanized at the site. The horses were part of a consignment of 10 horses that arrived in the UK from Belgium shortly before Christmas.

Due to the recent cold weather in the UK, the stable owner had been stabling many more horses than normal. All the horses that were living with the infected horses were "clinically normal" on inspection, but will be quarantined and tested for infection using blood samples and the Coggin’s test every 30 days for a 90 day period. It is believed that if they remain negative after 90 days they will be allowed to leave quarantine. According to expert entomological opinion, insect vectors for the transmission of the disease are only in their larval stage at this time of the year in the UK and transmission therefore seems doubtful.

Jun 29, 2017 admin Comments Off on Twisted Limbs in Kittens