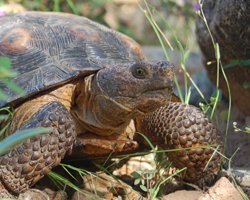 A Desert Tortoise has won the title of "Most Unusual Claim" for May after injuring himself after getting his head stuck on a branch.

While tortoises are not widely known for dramatic episodes in their life, "Charlie" the tortoise of Ramona, California, gave his owner Brandie Keaveny quite a shock when she came home from work one day. "I came home from work and was playing ball with my dog," Brandie said. "Charlie was eating grass and came over to me when he saw me. As he got closer, I noticed there was something wrong with his head. His scalp skin was pulled forward like a sardine can, exposing bone and muscle, and skin was off his ear."

Brandie realized immediately she’d need to get 50-year-old Charlie help fast, but with her regular veterinary office closed for the day and most after-hour emergency hospitals unwilling to treat an exotic pet, she had few options. "After an hour of calling around I found an office that had hours until 9 p.m. and would see a tortoise. We got him in and the doctor agreed that this was the strangest thing he had ever seen with a tortoise."

With no defensive wounds or tooth and claw puncture marks visible, the veterinarian on duty knew Charlie’s injuries had not been caused by an animal attack. Because the skin on Charlie’s scalp had been pulled forward, Brandie and the veterinarian theorized that the tortoise had been resting under a low hedge, had managed to get his head caught on a branch, and pulled his head too quickly into his shell, scraping the skin as he went. The veterinarian prescribed a month’s worth of antibiotic for Charlie, and he wore his stitches for several weeks. Fortunately, the experience appears not to have been too traumatic for the tortoise. "He acts like nothing has happened and is doing really well," Brandie concluded.

Charlie’s insurance claim was one of 80,000 insurance claims received by the nation’s largest pet insurer, Veterinary Pet Insurance Co. (VPI), in May. The claim was considered along with other uncommon medical claims submitted in May and selected by VPI as the most unusual of the bunch. As the most unusual claim submitted in May, the claim will be placed in the running for the 2010 VPI Hambone Award (named in honor of a VPI-insured dog that got stuck in a refrigerator and ate an entire Thanksgiving ham while waiting for someone to find him).

Other honorable mentions in May included a Yorkie that was struck in the head with a frozen hamburger patty, a mixed-breed dog that licked a cactus, an English bulldog that ate steel wool scouring pads, and two unrelated incidents in which dogs fell from two and four story windows, respectively. All pets considered for the award made full recoveries and received insurance reimbursements for eligible expenses. 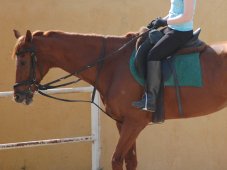 Jun 29, 2017 admin Comments Off on Developing an Independent Seat