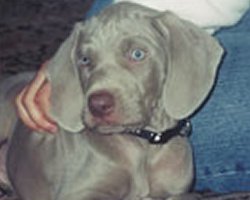 A dog that was stolen from it's backyard almost 7 years ago has been reunited with it's shocked owners.

On the day after Thanksgiving in 2003, Brad and Amy Davis and their three children reported their nine-month old Weimaraner called "Jake" as stolen. The Davis family had gone to have their Christmas pictures taken and were away from their home for no more than 45 minutes. That was enough time, however, for thieves to steal their dog from the backyard, leaving his collar behind.

"He had been a Houdini-like dog in the past," Amy Davis said, "but there was no way he would have been able to get the collar off by himself." Despite offering rewards for his return, the family never received any news or updates about Jake’s whereabouts. And after nearly seven years had passed, the Davis family had given up hope of ever finding their dog again. On September 7th, however, Phyllis Arsenault, a recovery specialist from the American Kennel Club’s Companion Animal Recovery (AKC CAR), the nation’s largest not-for-profit pet recovery service, called the Davises to say Jake had been found as a result of his microchip being scanned at the Estill County Animal Shelter in Ravenna, Kentucky – over 420 miles and 7 hours from their home in Michigan.

The Davises learned that Jake had been dropped off at the shelter by a gentleman who had found him running in the street. "The really strange thing is that when we got the calls, we had just returned from Kentucky and our son’s BMX race – we were only about 100 miles away from him!" said Amy. Since his return, Jake has transitioned back into his family quite easily, even making friends with the Davises’ new six-month-old puppy.

"When the shelter staff contacted us I was really glad we had the family’s updated information in our database and that we were able to reunite them with Jake," said Phyllis Arsenault, the recovery specialist who handled the case. "When I spoke to Brad, he was just ecstatic about his dog’s return."

According to the American Kennel Club’s National Pet Theft Database, based on customer and media reports, approximately 177 pets have been reported stolen so far in 2010 compared to 162 in 2009 and 71 in 2008. And this case demonstrates the importance of microchip identification in the fight against pet theft. 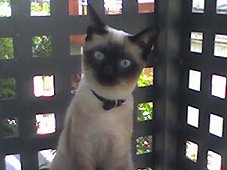