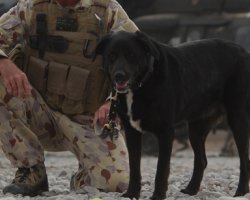 An Australian Special Forces Explosive Detection Dog has been discovered safe and well after being missing in action in Afghanistan.

The black Labrador Retriever named "Sabi" was missing for almost 14 months after a combined Australian, US and Afghan National Army convoy was ambushed by a much larger Taliban force. In the ensuing battle, 9 Australian soldiers, including Sabi’s handler were injured. The role of Sabi and other dogs like her is to counter the threat posed by improvised explosive devices (IEDs) in Oruzgan province.

Sabi was found by an American soldier at an isolated patrol base in the north-east of the Oruzgan region last week. The soldier was aware that his friends in the Australian Special Forces were missing one of their explosive detection dogs and he said that it was immediately obvious that Sabi was not an "ordinary" dog. "I took the dog and gave it some commands it understood," said the soldier, who is referred to only as John.

Sabi spent 14 months in a desolate region of Afghanistan, and Australian forces had tried to find her on numerous occasions. Late last week Sabi was flown to the town of Tarin Kowt to be reunited with her trainers. One of the trainers described it as "incredible" that Sabi had been found and said that she instantly remembered the games she  used to play during training. Sabi was coming to the end of her second tour of duty when she went missing, and it is not immediately clear whether she is to be deployed or flown back to Australia.

The dog’s handler, Trooper Donaldson, is currently in the United Kingdom for a meeting with the Queen. "She’s the last piece of the puzzle," Trooper Donaldson said. "Having Sabi back gives some closure for the handler and the rest of us that served with her in 2008. It’s a fantastic morale booster for the guys."