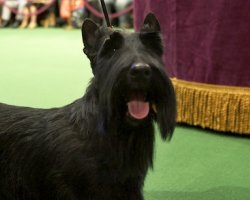 A Scottish Terrier named Sadie has beaten over 2,500 dogs to the coveted "Best in Show" award at the 2010 Westminster dog show.

Another sold-out crowd at Madison Square Gardens has watched more than 2,500 dogs and 3 new breeds compete for honors in one of the world’s most prestigious dog shows. At 11 p.m. last night Sadie, a Scottish Terrier from Eagle, Idaho became the 8th Scottie to win "Best in Show". Sadie, also known as Ch Roundtown Mercedes of Maryscot, was also in the final last year and this win is her 112th Best in Show award. The other group winners competing in the final were a Puli, a Whippet, a white Toy Poodle, a French bulldog, a Brittany Spaniel and a Doberman Pinscher.

The Westminster Kennel Club’s Annual All Breed Dog Show is probably second only to the United Kingdom’s Crufts show as a measure of canine success. Last year’s show was celebrated by senior citizens everywhere, with the 10-year-old Sussex Spaniel called Stump winning "Best in Show" – that’s 2 years older than the previous oldest winner. What was even more remarkable was that Stump had retired 2 years earlier after winning the Sporting group but failing to win "Best in Show". In 2008, the show was won for the first time ever by a Beagle named Uno.

This year’s show welcomed 3 new breeds to the 170 breeds of last year: The Irish Red and White Setter, the Norwegian Buhund and the Pyrenean Shepherd. Despite its name, the Irish Red and White Setter is a distinct breed, not just a different colored version of the Irish Setter, and has been known in Ireland since the 17th century. The history of the Norwegian Buhund extends back to the Vikings, and is used for herding livestock, guarding and hunting. The Pyrenean Shepherd is a herding breed that is important in farming communities in the High Pyrenees mountains in France. 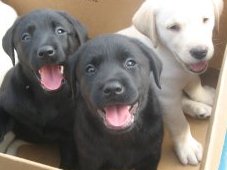 Jun 29, 2017 admin Comments Off on Holiday Safety for Pets