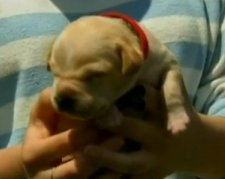 A one-week old puppy has survived being accidentally flushed down the toilet by a 4-year old boy, after drainage experts came to the rescue.

The puppy’s owner’s son, Daniel Blair, was concerned that the puppy was dirty and needed to be washed. After washing the puppy he decided to rinse the soap off using the toilet’s flush mechanism, but to his horror he dropped the puppy into the toilet, before alerting his mother.

The puppy’s owner, Allison Blair, called the Royal Society for the Prevention of Cruelty to Animals (RSPCA) and the fire brigade, who both attended the scene immediately. After watching their efforts fail for 3 hours, Allison called Dyno-Rod, drain clearing specialists, and asked if there was anything they could do to help.

According to Dyno-Rod, they took a call from a "very distressed lady", who said, "Please help me, I don’t know what to do, the fire brigade are here and they can’t do it."

The local Dyno-Rod Operations Manager immediately realized the potential of their CCTV technology to find out exactly where the puppy was located in the drainage system. He also instructed none of the neighbors to flush their toilets to prevent the puppy being flushed into the main sewer. To calm Allison’s fears about the potential cost of the rescue, Dyno-Rod agreed to carry out the work for free.

"All we were concerned about was getting the puppy out alive", said the the local Dyno-Rod Operations Manager.

Plumber Will Craig, who attended the scene, said he used a long rod to push the puppy to the nearest manhole cover, where it could be fished out to safety. He told the Associated Press that eventually he pushed the puppy far enough for the fireman to grab him from a manhole cover. And as a tribute to the rescue team, the puppy has been named "Dyno".