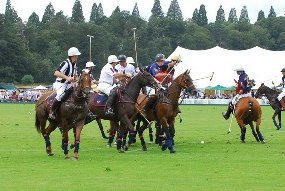 Following the deaths of 21 polo horses shortly before the US Open Championship last week, Florida's State Veterinarian has confirmed the probable cause of death as an overdose of the mineral selenium.

In a report to Florida Agriculture and Consumer Services, Florida State Veterinarian Thomas J. Holt stated that the animals had "significantly increased selenium levels" in samples tested. He reported that the findings obtained at the department’s Animal Disease Diagnostic Laboratory in Kissimmee were confirmed by independent testing conducted at multiple other facilities across the nation. Selenium is a trace mineral which is essential for normal cell function and health in animals, and is often included in small quantities in supplements and feed for horses. Large doses, however, can be fatal to animals.

"Signs exhibited by the horses and their rapid deaths were consistent with toxic doses of selenium," Dr. Holt said.

The University of Florida conducted necropsies on 15 of the horses and performed extensive toxicology testing. Florida Agriculture and Consumer Services Commissioner Charles H. Bronson said that no further information on the investigation can be disclosed at this time to prevent the investigation from being compromised.

The Venezuelan polo team had charged Franck’s Pharmacy of Ocala, Florida, with preparing a substitute for a medication called Biodyl, which is not approved for use in the US, but is widely used elsewhere. Biodyl is a vitamin and mineral solution containing ATP, selenium and B12. The pharmaceutical compounding lab later admitted that "the strength of an ingredient in the medication was incorrect". The medication was apparently given to the horses shortly before they began to collapse.

"In light of the statement from Florida State Veterinarian Thomas J. Holt, we can confirm that the ingredient was selenium," Jennifer Beckett, the pharmacy’s chief operations officer, said in a statement.

It has yet to emerge if the error was due to the incorrect amount being specified in a prescription provided by the team’s veterinarian, or if the pharmaceutical lab was at fault with it’s dosage calculations.