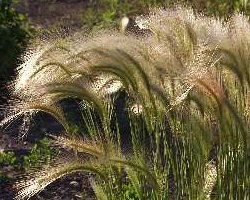 The California Veterinary Medical Association (CVMA) has warned of the health dangers of foxtails to pets during the summer months.

A foxtail is a spiky cluster of grass that some plants such as a the foxtail and spear grass use to disperse seeds. The foxtail is designed to attach to the fur of animals in order to aid wide-ranging dispersal of a plant’s seeds, so it is natural that they will attach to the coats of dogs, cats and horses. The CVMA has been highlighting the health problems associated with a foxtail becoming lodged in hard to reach places in all pets, but points out that dogs, specifically long-haired breed, are most affected and that cats are less affected because of their grooming routines. But all animals, including horses, are at risk of serious problems if they snort a foxtail into their nasal passages.

Foxtails can become lodged around the eyes, nose, mouth, ears, coat, and paws, and will eventually pierce the skin and cause infection. The sharp end points and microscopic barbs of foxtails ensure travel in only one direction – further inside the animal’s body. Once inside, foxtail removal becomes a surgical procedure and must be done by a veterinarian. The CVMA says pet owners should be aware of the following health problems that might indicate the presence of foxtails:

"At the first sign of a possible foxtail invasion, get your pet to your veterinarian immediately," stresses CVMA president Dean Henricks, DVM. "Pet owners need to guard against further foxtail damage."