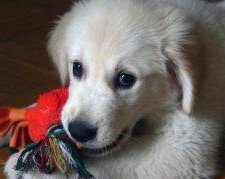 A new study has cast doubt on whether a dog's famous "guilty look" is real, or a product of our imagination.

Dog owners often using anthropomorphisms – the application of human characteristics to things not human – when describing their dog’s behavior. Research by Alexandra Horowitz, assistant professor of Bernard College, New York, and published in the July 2009 issue of Behavioural Processes (Disambiguating the "guilty look": Salient prompts to a familiar dog behavior), aimed to find out if these anthropomorphisms are based on sound evidence, or whether they are purely a result of human psychology. In other words, when humans think their dogs have a guilty look, are the dogs actually feeling guilty?

A dog’s "guilty look", as described by their owners, typically occurs when the dog has done something that he knows he is not normally allowed to do. To test whether dog owners were correctly interpreting a "guilty look", 14 dogs were videotaped over a set of trials that included the opportunity for dogs to eat a treat when their owner left the room, and in each case the owner was left unaware of what action the dog actually took. The researchers concluded that when the dog owners suspected that their dog had a "guilty look", the dog was no more likely to have done anything to warrant this interpretation.

Jun 29, 2017 admin Comments Off on Counterfeit Flea and Tick Products

The Importance of Directing Every Stride

Jun 29, 2017 admin Comments Off on The Importance of Directing Every Stride