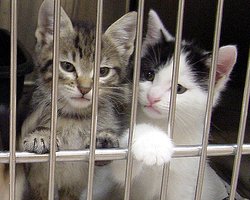 As Southeast Louisiana shelters struggle with abandoned cats, it is hoped that a massive donation of cat food might prevent many owners relinquishing their pets.

According to the Louisiana Society for the Prevention of Cruelty to Animals (LA/SPCA), Southeast Louisiana shelters have seen an increase in the number of cats coming in to shelters. Cat owners relinquishing their pets because they can no longer afford to care for them is compounded by the naturally busy summer cat breeding season. In an effort to focus donation on cats and their owners in the parishes of Southeast Louisiana and aid the Gulf Coast outreach efforts of the LA/SPCA, Mars Petcare US has shipped a second donation of more than 15,000 pounds of cat food to the oil-stricken Gulf coast.

"The coastal parish animal shelters have experienced two to three times the number of pets being relinquished than last summer," says Ana Zorrilla, CEO of the LA/SPCA, "Studies have shown pets reduce stress, aid in overcoming depression and loss, and provide comfort in times of need. Knowing how bonded people are with their pets, it?s heartbreaking to hear of families having to make this kind of decision. The pets have become innocent victims of this disaster."

The donated food consists of the WHISKAS® Brand Food for Cats and THE GOODLIFE RECIPE® Brand Food for Cats, and will be distributed by the LA/SPCA through Catholic Charities Archdiocese of New Orleans distribution sites and animal shelters in the region. Outreach is focused on pet owners in the parishes of Terrebone, Jefferson, St. Bernard, and Plaquemines. On June 3rd, Mars delivered more than 12 tons of dog and cat food to the area.

"Cats are often thought of as fiercely independent and self-sufficient so they’re sometimes overlooked in times of real need," said Debra Fair, vice president of corporate affairs, Mars Petcare US. "In our second pet food donation, we felt it was important to focus on cats and their owners and try to bring them a little relief. We’re pleased the LA/SPCA will help us distribute the food directly to the cat owners who need it most."

The Benefits of an Older Dog