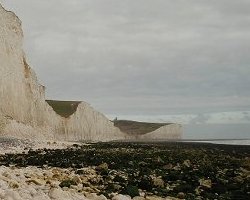 A Springer Spaniel has survived a 90m fall into the sea after being rescued by lifeboats.

On Saturday a Springer Spaniel called Poppy was being walked by her owner Ben Markwick’s sister and her partner Stephen Winslade in East Sussex, on the south coast of the United Kingdom, near the Seven Sisters cliffs at Brass Point. Poppy was chasing a seagull when she seemed to disappear, and her distraught owners soon discovered she had fallen over the cliff. When they bent down to look over the edge, they could see Poppy swimming in the sea.

After the dog’s owners called the coastguard, a lifeboat was called out to "avert the risk of a dog owner going into the cold water to rescue his dog". The lifeboat was launched at 3.41p.m. and was on the scene just minutes later, where they were able to rescue the dog. According to the The Royal National Lifeboat Institution (RNLI), the lifeboat was available for service again by 4 p.m. Poppy has been treated for a partially collapsed lung, but has since fully recovered.

"She ran to the edge and just disappeared. She is really well-trained and well-behaved, but I think she ran so fast there was no chance of her stopping. I threw myself down and looked over the edge and saw her paddling," Mr Winslade told the BBC yesterday.