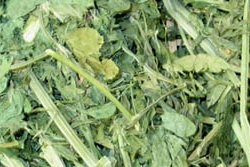 A new study demonstrates that a diet of grass hay may reduce the chance of a horse developing colic due to enterolithiasis.

Colic is a general term for abdominal pain in horses, encompassing many conditions which are the underlying cause. Most causes of colic relate to a disturbance of the colon, and some are fatal if left untreated, with surgical intervention often necessary. Among domestic horses, colic is the primary cause of premature death, with approximately 10% of all horses suffering from it. One possible cause of colic is an "Enterolith", which is a round ball of mineral deposit which forms around a foreign body, such as a piece of gravel, often causing an intestinal blockage. While enteroliths are not common, they are encountered in a higher frequency in states where the soil is particularly sandy and where alfalfa hay is in abundance, such as California. Any horse diagnosed with colic due to enterolithiasis usually requires surgery to remove the obstruction.

A team led by Diana M. Hassel, DVM, PhD, of the Comparative Gastroenterology Laboratory at Colorado State University, has been researching if the intestinal pH and mineral concentrations in the colon of horses would vary in response to different diets and water supplies, and whether differences exist in horses with and without enterolithiasis.

Horses with enterolithiasis were found to have higher calcium, magnesium, phosphorus and sulfur concentrations and higher pH in colonic contents than horses without the condition. Three horses with and without enterolithiasis took part in four feeding trials: grass hay and alfalfa hay with untreated or filtered/softened water. Horses that were fed alfalfa had a more alkaline pH than those fed grass, and had a higher calcium, magnesium, phosphorus and sulfur concentration in their intestine. Grass hay consumption led to reduced concentrations of select minerals and a more acidic colonic environment compared with alfalfa, which the team concludes is " probably beneficial in the prevention of enterolithiasis".

The work will be published in the October 2009 issue of The Veterinary Journal, in a paper titled "Influence of diet and water supply on mineral content and pH within the large intestine of horses with enterolithiasis".