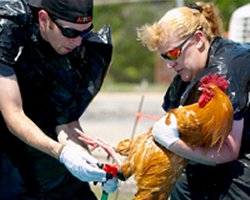 The ASPCA® is caring for more than 70 animals that were rescued from areas of Tennessee in last week's floods.

Last Tuesday the ASPCA® (The American Society for the Prevention of Cruelty to Animals®) dispatched its field investigations and response team to Tennessee in response to a request from the Dyersburg-Dyer County Humane Society. The team has been assisting in the recovery and sheltering of animals displaced by the recent floods, which have so far claimed the lives of 23 people.

Dogs, cats and various birds were rescued from floodwaters, trees, rooftops and abandoned homes in the Dyersburg city limits, approximately 80 miles north of Memphis. Many of the animals were recovered following requests from pet owners who were forced to evacuate without warning. The ASPCA has established a temporary shelter behind the humane society to handle the overflow of animals, and set up a decontamination station where animals affected by the flooding are washed and cleaned. In addition, the ASPCA provided extra cages, bowls, food industrial fans, and other necessary supplies to help care for animals.

"Our city has been declared a disaster area and many neighborhoods have been evacuated," said Dr. Carol Feather, president and co-founder of the Dyersburg-Dyer County Humane Society, which services all of Dyer County, Dyersburg and Newbern. "We’re grateful for the ASPCA’s assistance, and to our own staff and volunteers, all of whom have been working non-stop to help animals that are abandoned or lost. We want to save all the animals we can – that’s our job."

Dr. Feather detailed how all incoming animals were being given physical exams and vaccinated as a precaution in the event that veterinary records could not be located. The shelter will be holding onto rescued animals until their families become settled. "In most instances, even if they have identification, we’re not yet able to reach their owners because they’ve had to evacuate," she added.

Photo courtesy American Society for the Prevention of Cruelty to Animals®

Teach Your Dog to Ring a Bell to Go Out