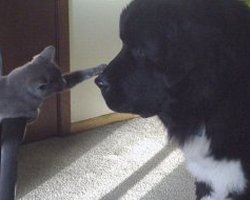 A recent study by Oxford University has concluded that dogs developed bigger brains than cats because they are more social.

For the first time, researchers from Oxford University have attempted to chart the evolutionary history of the brain in mammals. They have discovered that there are huge variations in how the brains of different groups of mammals have evolved over that time. The researchers now suggest that there is a link between how social an animal is and the size of their brains relative to their body size, meaning that dogs may have larger brains relative to their body size than cats because they are more social animals. That is, dogs live in highly hierarchical packs, where as cats tend to live in solitary.

The research team analyzed brain and body size data of more than 500 species of living and extinct mammals, and found that the brains of monkeys, horses, dolphins, camels and dogs grew the most over time. All of these animals tend to live in stable social groups, where are animals that tend to live more solitary lives such as cats, deer and rhino grew more slowly. It has previously been believed that brains of all mammal groups have grown at a similar rate. The study is due to be published in the Proceedings of the National Academy of Sciences (PNAS).

Lead author of the study, Dr Susanne Shultz, said: "This study overturns the long-held belief that brain size has increased across all mammals. Instead, groups of highly social species have undergone much more rapid increases than more solitary species. This suggests that the cooperation and coordination needed for group living can be challenging and over time some mammals have evolved larger brains to be able to cope with the demands of socialising."

Play Fetch with Your Dog