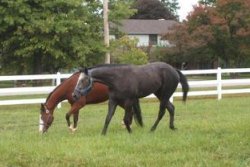 The history of Texas is closely intertwined with that of the American Quarter Horse, so it is appropriate that the breed has been declared the state's official horse.

The signing of this declaration will follow the governor’s signing of House Bill 1881, which establishes the Texas Equine Incentive Program, creating a voluntary monetary incentive program to keep Quarter, Paint and Appaloosa horses breeding, showing or racing in Texas. The fund makes all American Quarter Horses, American Paint Horses and Appaloosas conceived by mares and stallions living in Texas during 2009 eligible to be nominated to the new Texas Equine Incentive Fund.