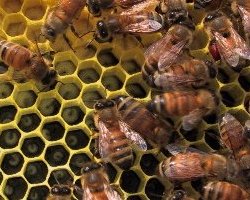 A swarm of Africanized Bees have killed two horses on a ranch in California.

On July 21st, two Tennessee Walking horses were stabled in a barn that contained three undiscovered colonies of Africanized bees at Wagon Wheel Ranch in Menifee, owned by Christa Caudle Schaffer. The horses were swarmed by the bees at some point that morning and were later discovered by a ranch hand. The ranch’s veterinarian treated the horses with epinephrine (a stimulating hormone) and dexamethasone (an anti-inflammatory steroid), but the horses later died of anaphylactic shock, a result of a server reaction to an allergen such as bee venom.

"They were just pleasure horses for my daughter and me, but we were very close to them. In a way, I think they gave themselves up to save the other horses," the horses’ owner and close friend of the Ranch owner, Nikki Tripodes, told The Californian. "Scoop" was black with a white blaze and white socks, and "Charger" was almost identical.

Africanized honey bees tend to start stinging more easily and in greater numbers than other types of bees. They were bred in the 1950s to produce a calmer bee that produced more honey – a program that obviously failed to work. With each season Africanized bees make up a larger proportion of the bee population in affected states, including Texas, Arizona, New Mexico, and California. And this is not the first time that the bees have killed pets- in May 2007 3 pet dogs in Hesperia, California, were killed after disturbing a hive of Africanized bees.

Since the horses were killed, ten horses have been removed from the Wagon Wheel Ranch, leading to a situation where the owner is unable to afford to pay for the removal of the more than 100,000 bees. Recognizing the danger posed to a local school, the city of Menifee has therefore agreed to eradicate the insects at it’s own expense. During the night next Monday, a contracted exterminator will begin killing the bees, and on Wednesday a crew will demolish the buildings where the bees built their colonies. Ranch owner Christa Caudle Schaffer will be eventually billed for the expense when she eventually sells all or part of the ranch.

A Parent’s Guide to Dog-Bite Prevention

Jun 29, 2017 admin Comments Off on A Parent’s Guide to Dog-Bite Prevention

Dog Breeds that Molt Less than Others

Jun 29, 2017 admin Comments Off on Dog Breeds that Molt Less than Others