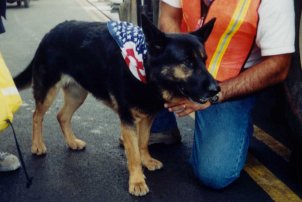 Search dogs were an extremely important part of the search efforts both immediately after the World Trade Center disaster and in looking for bodies in the following weeks. And unlike their human counterparts, they do not seem to have suffered the same ill-effects.

Many of the dogs put to work immediately after the disaster suffered injuries from burned feet, breathing difficulties and eye infections. However, despite not having any airway or skin protection these dogs have apparently not suffered from the same long-term illnesses that have affected the people that took part in the same work.

Scientists have spent years studying the health of search-and-rescue dogs that nosed through the debris at ground zero, and to their surprise, they have found no sign of major illness. They are trying to figure out why this is so. At the University of Pennsylvania 97 dogs have been studied over the last 5 years and despite a slightly higher proportion of those having died over a control study, the difference is not said be statistically significant. The study was funded by the American Kennel Club Canine Health Foundation.

The dogs involved in the study spent an average of 10 days after the 2001 terrorist attacks at either the trade center site, the landfill in New York where most of the debris was taken, or the Pentagon.

Play A Snow Game for Dogs

The Proper Feeding of Ponies

Jun 29, 2017 admin Comments Off on The Proper Feeding of Ponies