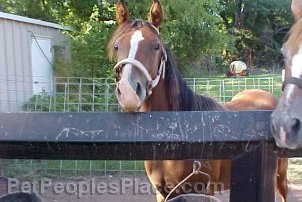 If an injured horse could talk, doctors treating it would be better able to understand the stress he is undergoing as he recovers and relieve his pain. That's the idea behind the Equine Vocalization Project, an acoustical analysis of horse vocalizations by two former Navy acousticians interested in improving the lives of horses by interpreting how stress is communicated when they whinny.

The results of the first two years of scientific analysis by David Browning, an adjunct professor at the University of Rhode Island, and Peter Scheifele, a research associate at the University of Connecticut, were reported this week at a meeting of the Acoustical Society of America in Providence.

"This is a modest introductory research effort to determine if there are any specific vocal expressions connected to stress," explained Browning. "It’s an area of acoustics that has been neglected by the scientific community until now."

The scientists said that the acoustic spectrum of the vocalizations of most domestic animals looks much like that of a party horn — one simple tone. But the vocalizations of equines – horses, donkeys and zebras — are more complex, with a wider bandwidth and varying frequency.

"The quest now is to determine if horses can utilize this varying frequency to produce specific vocal expressions," Browning said. "If so, you might be able to get a sense of their physical condition by their vocalizations."

Based on acoustical analysis, a horse’s whinny consists of two elements: a constant tone with varied harmonics that increase as the animal becomes more agitated, and a variation in frequency that may be associated with communication or expression. Under high stress conditions, like when stallions fight, their whinnies degenerate to an uncontrolled high-pitched scream, according to Browning. But under calm conditions, especially when their vision is restricted like when they are in a barn stall, their whinnies appear to have a rich and variable content.

"The whinny is not a threatening sound, but the question is ‘what is it for?’" asked Browning. "We now know that the best place to go for answers is under calm and low light conditions, like in a barn."

He’s not content to just study horses, though. Browning has already evaluated the braying of donkeys and found that, while they have rich acoustics, they apparently have little control of their content. "When they bray, they just let it rip," he said. He hopes to begin work this summer studying the vocalizations of three species of zebra – one that brays like a donkey, one that whinnies like a horse, and one that barks like a dog. By matching the frequency changes with the animals’ behaviors, Browning hopes to begin to interpret just what they are saying.

Jun 29, 2017 admin Comments Off on Holiday Safety for Pets