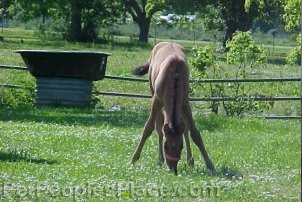 The first commercially cloned horse in the United States was born in February at an Oklahoma farm at a cost of $150,000. If that seems a lot, consider that the original has earned more than $380,000 as a competition and show horse.?

The foal, called Royal Blue Boon Too, is a clone of the original Royal Blue Boon, a 26-year-old American Quarter Horse now past breeding age. Mark Walton of Texas-based ViaGen, one of the companies that produced the clone, claims that this technology take the guesswork out of breeding. ViaGen hopes the foal marks the successful start to a partnership it has struck with Encore Genetics, a horse-breeding and marketing firm.

Since the first horse was cloned by Italian scientists in 2003, several more have been created, and experts are divided about the long-term health prospects of such animals, citing that the technology is still little more than a scientific experiment. Now, ViaGen and Encore hope to begin a "pipeline" of commercial clonings on a continual basis. To encourage sales, the company even gives horse owners a $60,000 discount on the price of a second clone of the same animal.

In addition to Royal Blue Boon, the companies have duplicated another horse, Tap O Lena, whose clone was born March 9. It has also collected and frozen tissue samples from more than 75 champion horses for future cloning.

The National Cutting Horse Association will allow clones to compete in the sport of cutting, in which horses separate cows from a herd. However, the news spurred the Oklahoma Quarter Horse Racing Association to push for legislation to ban clones from the state’s racetracks. Many horse registries in the U.S. have also begun to establish policies regarding cloned horses: The Jockey Club, the breed registry for all Thoroughbred horses in North America, refuses to register clones.