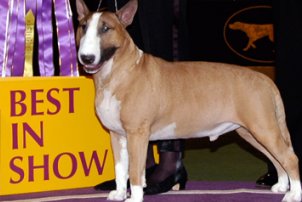 For the first time a Colored Bull Terrier has won the annual Westminster Kennel Club show. His classic bull terrier profile helped him edge out six of his strongest competitors, including a few fans' favorites.

The Bull Terrier named Rufus (a.k.a. "Ch Rocky Top’s Sundance Kid") beat stiff competition from a Golden Retriever, an Old English Sheepdog, a Scottish Deer Hound, a Dalmatian and a Pug in the final round of judging, which ended just before 11 p.m. Tuesday. His owner, Barbara Bishop of Homedale, N.J. described Rufus as being a "couch potato" in his spare time.?

The Westminster Kennel Club has its roots in the 1870’s when a group of sporting gentlemen met regularly in the bar of a Manhattan hotel to trade stories about their shooting accomplishments and the talents of their dogs. Eventually they formed a club and named it after their favorite hotel: The Westminster Breeding Association.

Early on, the club owned a kennel and raised Pointers for hunting and field trials. In 1877, the First Annual New York Bench Show of Dogs, given under the auspices of the Westminster Kennel Club, was held in the Hippodrome at Gilmore’s Garden in New York City, drawing an entry of 1,201 dogs. The Bull Terrier is classified in two distinct varieties: White or Colored – only the White variety had previously won Best of Show.?

Over 165 breeds and varieties were represented at this year’s show (in 7 groups) which took place on Monday 13th and Tuesday 14th February.

A Leash for Your Ferret