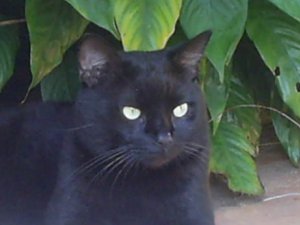 The Bush family's 18 year-old cat India has died just weeks before they were due to leave the White House.

According to a statement from the first lady’s office on Monday, India died peacefully at home on Sunday. India, a black American Shorthair, was named after former Texas Rangers player Ruben Sierra, whose nickname was "El Indio", but was often affectionately called "Kitty" by the family. President George W. Bush was previously a co-owner of the Texas Rangers.

India was often overshadowed by the family’s more high-profile Scottish Terriers, including Barney that had his own "Barney Cam" on the internet, and Miss Beazley. Barney made headlines worldwide by biting a Reuters reporter in the Rose Garden. Only once was India involved in an incident of significance: In July 2004 angry youths in the country of India burned an effigy of President Bush because they declared that naming his cat India was an insult to their country.

India grew up with the Bushs’ twin daughters Jenna and Barbara, but stayed on at the White House when they moved to college and remained out of the media for the last 7 years of her life.