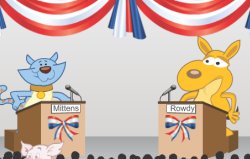 The ASPCA® has recently launched CATvsDOG.org, an online campaign to raise awareness about some of the most critical animal welfare issues today and to urge animal lovers across the country to support its drive towards ending animal cruelty.

"The goal of the nationwide online campaign is to incite one million Americans to sign a pledge to prevent cruelty and abuse," said ASPCA President & CEO Ed Sayres. "By signing the pledge and casting their vote, people are helping the ASPCA ensure animals have a voice in the upcoming election."

The campaign highlights eight important animal welfare issues such as puppy mills, "dangerous breed" bans, pets and family violence through the eyes of candidates Mittens-the-Cat and Rowdy-the-Dog. Candidate Mittens and Rowdy take humorous, opposing positions on each of the issues through intriguing debates that are summarized with facts to bring light to the seriousness of each topic.

"The ASPCA will deliver one million signatures collected from the online campaign to the newly elected president shortly after the presidential election is concluded," said Mr. Sayres. To date 366,533 signatures have already been collected.

What You Need to Know About Dog and Cat Nutrition

Jun 29, 2017 admin Comments Off on What You Need to Know About Dog and Cat Nutrition

Glucosamine and Your Arthritic Cat

Jun 29, 2017 admin Comments Off on Glucosamine and Your Arthritic Cat